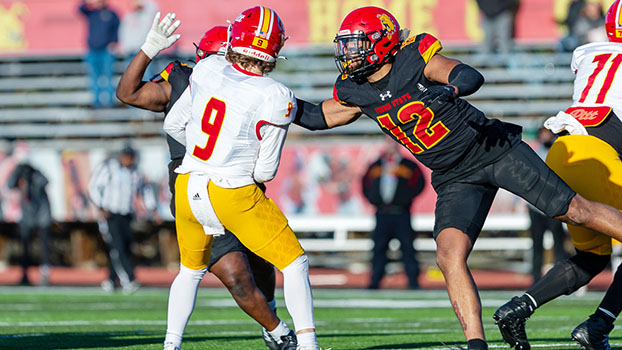 BIG RAPIDS — A monster defensive performance from the Ferris State University football team denied the Pittsburg State Gorillas as the Bulldogs advanced to their sixth consecutive regional championship game with a 17-14 victory in the Super Region 3 Semifinals at Top Taggart Field Saturday.

Ferris State freshman Eddie Jewett knocked through the game winning field goal with 9:47 remaining in the fourth quarter, as the Bulldogs held off a second half charge by the Gorillas to win the game.

With the win, the second-seeded Bulldogs have earned a rematch with rival Grand Valley State at Lubbers Stadium on Saturday in Allendale. Game time is to be announced.

It was not your typical Ferris State game as the Bulldogs turned the ball over five times and  Pittsburg State started five different drives inside Bulldog territory, including twice in the red zone and once at the Bulldog five-yard line.

Ferris State’s stingy defensive unit denied the Gorillas a single point on all but one of the drives starting on its half of the field, including a missed field goal and turnover on downs on the two started in the red zone. The Bulldog defense allowed just seven points. 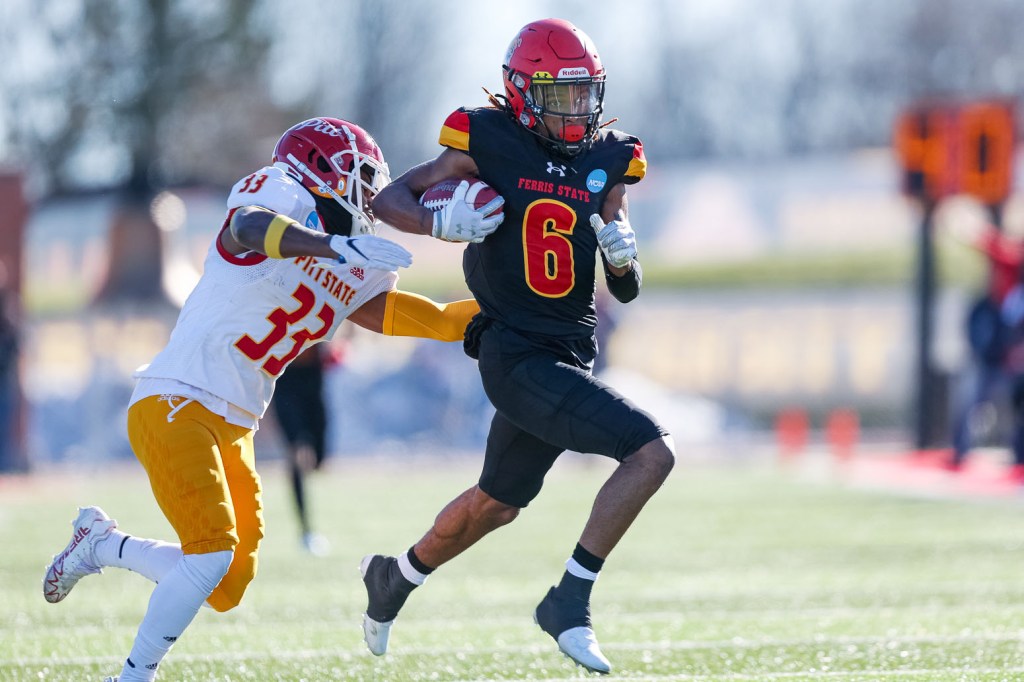 On defense, the Bulldogs dominated the line of scrimmage, teeing off for nine sacks that resulted in a loss of 71 yards. The Bulldog defense allowed 217 yards of total offense and allowed just 2.9 yards per play. Ferris State gave Pittsburg State just 40 yards on 37 rushing attempts on the day.

Leading the way for Ferris State was junior defensive end Caleb Murphy (Dowagiac), who set a new Bulldog record for single-season sacks as part of his monster six-sack day. Murphy was the sole cause of a loss of 47 yards for the Gorillas alone. On the day, Murphy finished with 10 total tackles, seven tackles for a loss, two quarterback hurries and a pass break-up in the Bulldog victory.

The Bulldogs created one turnover on sophomore Jacarvis Alexandre’s pick, near the Bulldog goal line in the third quarter.

Ferris State got on the board at 9:09 of the first period when redshirt freshman quarterback Carson Gulker scampered to the right pylon from two yards out for an early 7-0 Bulldog lead. The Bulldogs marched 78 yards on nine plays in 4:27 to find paydirt.

The Bulldogs kicked it into high gear when senior quarterback Mylik Mitchell found freshman slot receiver Brady Rose over the top for a 69-yard catch and score with 1:32 remaining in the opening frame to cap off a quick three-play 80-yard drive, lasting just 50 seconds and resulting in a 14-0 Bulldog advantage.

Late in the first half, the Gorillas got on the board when safety Brandon Mlekus picked off Mitchell and scurried into the endzone from 18 yards out to cut the Bulldog lead to 14-7, with 1:52 on the clock in the second quarter.

Midway through the third quarter, the Gorillas scored their last points of the day on a nine-yard dash by Caleb Lewis to knot the game at 14-14, punctuating a seven play, 45-yard drive that took 4:02 off the clock.

Ferris State pounded its way deep into PSU territory on the ground, but were denied the endzone. Jewett came on and drilled the 20-yard field goal with 9:47 to play, capping a nine-play drive that covered 59 yards and lasted 3:03.

As the game entered its final stretch, the Gorillas rolled the ball down to the Ferris State 17-yard line. Pittsburg State backed itself up late by penalties, and was forced to attempt to tie the game with 44-yard field goal try on 3rd and 23 with the clock moving. Cole Gentry’s attempt had the distance, but drifted wide right to seal the Bulldog victory.

On offense, the Bulldogs tossed the ball for 286 yards, all on the arm of Mylik Mitchell, who finished 24-36 with one score. On the ground, the Bulldogs rushed for 104 yards and racked up 387 yards of total offense. Through the air, sophomore receiver Tyrese Hunt-Thompson (Cassopolis) caught six balls for 122 yards, while Rose snagged five catches for 84 yards and a score. Ferris State also got eight grabs and 68 yards from senior slot receiver CJ Jefferson.

This year marks FSU’s eighth consecutive D2 playoff appearance, which is the second-longest streak in the country, and it also marked the eighth-straight year in which the Bulldogs hosted at least one playoff contest in Big Rapids. FSU will advance to the national quarterfinals for the sixth year in a row.