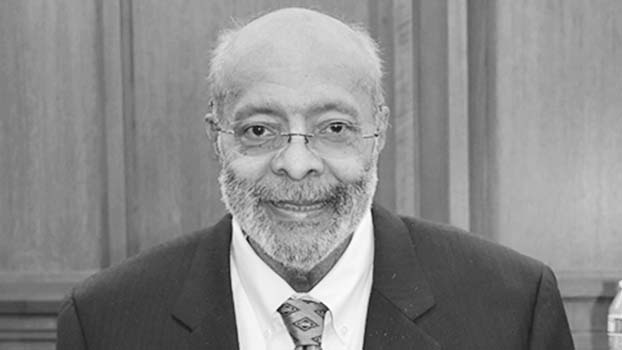 Roosevelt Thomas, Esquire, 73, of Vandalia, died peacefully Friday, Nov. 4, 2022, in the comfort of his family’s presence.

He was born March 6, 1949, in Oxford, Mississippi to Tevel and Lydia Thomas. Roosevelt attended Cassopolis High School where he was an outstanding student athlete. His football talent and abilities would earn him a scholarship to Western Michigan University where he played four years for the Broncos as a middle linebacker. Roosevelt was elected one of the team captains by his coaches and teammates in his senior year. After graduation from Western he lived his dream by having the opportunity of playing professional football with the Dallas Cowboys and New England Patriots.

Once his football playing days ended, Roosevelt set his sight on his next challenge — law school. He would enroll and graduate from the University of Notre Dame Law School. Degree in hand he made the decision to take his degree and talents to Chicago where he would become a successful attorney for the next twenty years. The next chapter in his life found him returning to Cass County to join his childhood friend Mark Westrate in his law practice. The two became law partners for the next twenty-three years.

Roosevelt enjoyed family and friends. The jumbo bash at his house on New Year’s Eve was a long-standing tradition. He also enjoyed spending time on his boat on Paradise Lake, playing golf, fishing, hunting, cooking and playing the guitar. A better than average guitar player he loved playing and singing for his family and friends. It didn’t take much urging for him to break into some Bob Seger (Turn the Page) or Harry Chapin (Cat’s in the Cradle) and many others.

Roosevelt will be greatly missed by family and friends. He is survived by one daughter, Darla Thomas; one son, Kyle Thomas; two sisters, Velma Davidson, Gwen Thomas; three brothers, Rick Davidson, Pete (Renee) Davidson, Bernard “Coach” Thomas; and a host of nieces and nephews. He was preceded in death by his parents and three brothers, Bennie Slate, Roscoe Davidson, and Terry Thomas.

The family prefers contributions in memory of Roosevelt be made to Elkhart Meadows, 2600 Morehouse Avenue, Elkhart, Indiana 46517.

Arrangements have been entrusted to Wagner Family Funerals Connelly Chapel in Cassopolis. Please share a memory or leave a message online: wagnercares.com