Ferris State routs Davenport in opening round of D2 playoffs 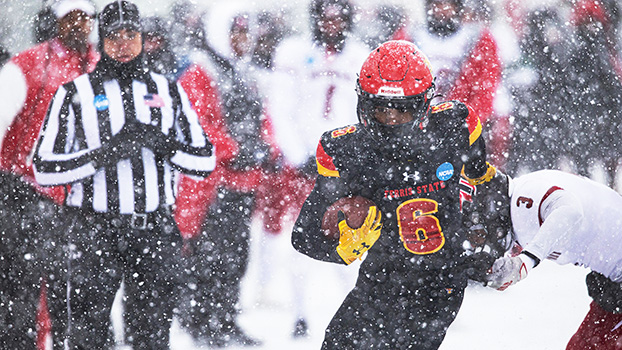 Tyrese Hunt-Thompson and Ferris State defeated Davenport in the opening round of the D2 playoffs in less than ideal conditions Saturday. (Photo courtesy Ferris State University)

The Bulldogs scored the final 35 points of the game, including a pair of key scores late in the opening half, and limited the Panthers to only 131 yards of total offense in garnering the win. Ferris State improvs to 10-1 overall with the triumph.

With the win, the Bulldogs will host unbeaten and third-seeded Pittsburg State in the second round of the NCAA Division II Playoffs Saturday in Big Rapids.

In their playoff opener, the Bulldogs jumped in front only six minutes into the game as senior quarterback Mylik Mitchell found wide out Dezmin Lyburtus on a 19-yard scoring throw to cap a four-play, 72-yard scoring drive. The PAT, however, was blocked.

The Panthers scored their only points of the afternoon with 4:55 remaining in the first half when quarterback Jason Whittaker hooked up with Demetrius Garrett on a nine-yard scoring throw. It finished a short 10-play, 45-yard march.

However, the Bulldogs answered with two big scores to close the half. Mitchell found slot receiver Emari O’Brien on a 52-yard scoring connection with 3:45 to play in the second quarter, giving FSU a 13-7 edge.

Then, after getting the ball back, the Bulldogs drove 70 yards in nine plays on the final drive of the half. Mitchell connected with receiver Cam Underwood on a 19-yard scoring completion down the sideline to make it a 20-7 game at halftime.

Ferris State increased its lead to 20 points early in the second half as sophomore defensive back Vincent Cooley scored on a 67-yard pick six interception return to push its advantage to 27-7. It was one of three interceptions the FSU defense had on the day.

The Bulldogs added a pair of fourth quarter scores with the first coming on Mitchell’s own two-yard run off the left side to finish a six-play, 63-yard march with 14:32 remaining.

Finally, the Bulldogs reached the end zone again via a short four-play, 44-yard drive with 7:56 to go, capped by quarterback Jesse Rivera’s nine-yard scamper to the end zone.

Overall, the Bulldogs racked up 396 yards of offense to only the 131 for Davenport. Ferris State ran for 232 yards on 47 carries while completing 12-of-23 throws for 164 yards. FSU held the Panthers to only 63 yards rushing on 29 tries and DU finished nine-of-27 in the passing game for 68 yards.

Mitchell accounted for four Bulldog scores and was nine-of-18 passing for 155 yards. Brady Rose caught four passes for 39 yards while CJ Jefferson ran for 71 yards on six carries. The Panthers were led by former Bulldog receiver Sy Barnett with four catches for 41 yards and Caleef Jenkins paced DU on the ground with 19 yards rushing.

Former Cassopolis standout Tyrese Hunt-Thompson had one run and one reception in the game.

The Bulldog defense came up with eight tackles for loss and two sacks in addition to the three interceptions and three pass breakups. Cyntell Williams led FSU with seven stops while Justin Payoute tallied six for FSU.

Dowagiac’s Caleb Murphy, the GLIAC Player of the Year, had four tackles and half a sack.

This year marks FSU’s eighth consecutive D2 playoff appearance, which is the second-longest streak in the country, and it also marked the eighth-straight year in which the Bulldogs hosted at least one playoff contest in Big Rapids.

FSU will compete on Thanksgiving weekend for the eighth year in a row on Saturday as FSU hosts the Pittsburg State Gorillas in the second-round at Top Taggart Field. Kickoff is set for 1 p.m. (ET). Additional details and ticket information will be announced soon.