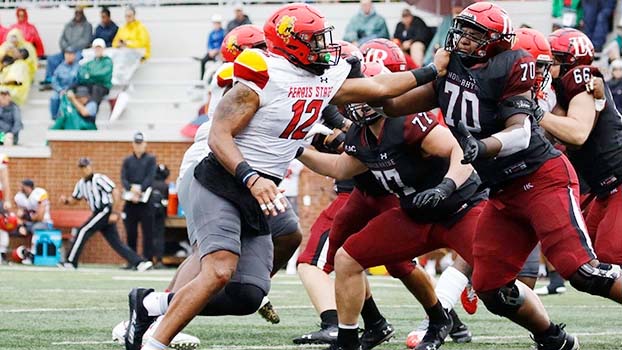 Ferris State rolled up 545 yards of total offense and limited WSU to only 123 yards while overcoming five turnovers in snowy and wet conditions in the Motor City.

With the win, the Bulldogs finish the regular-season with a 9-1 overall record and will now await the NCAA Division II Playoff selections this evening.

In Saturday’s win, the Bulldogs got a game-high 189 yards rushing from redshirt freshman quarterback Carson Gulker, who accounted for four scores in the win, adding 197 passing yards for Ferris State.

Gucker gave the Bulldogs the first score of the day with a four-yard touchdown run only 2:19 into the game, finishing off a five-play, 73-yard drive in the initial stanza.

Wayne State responded to the early Ferris State score by moving 69 yards in eight plays with Dion Brown, Jr., hauling in a 20-yard scoring reception with 4:42 to play in the opening period. That tied the game up 7-7.

However, the Bulldogs scored the next 23 points in the first half, beginning with Gulker’s 35-yard scoring throw to slot receiver Emari O’Brien late in the initial frame. It finished a five-play drive that covered 60 yards.

Midway thru the second period, Ferris State blocked a Wayne State punt, which eventually went out the side of the end zone, resulting in a safety to make the score 16-7 in the Bulldogs’ favor. Ferrie State would add yet another Gulker touchdown run less than three minutes after, capping a six-play, 55-yard jaunt.

The lead grew to 30-7 at halftime as the Bulldogs drove 87 yards in 11 plays before Gulker recorded his third rushing touchdown of the opening half with only 13 seconds to go.

In the second half, Wayne State pulled within 30-14 at 8:55 of the third quarter when Myren Harris scored on a one-yard carry, but the Warriors were shut out the rest of the way.

Ferris State began the fourth quarter with a 28-yard fumble recovery return from linebacker Nick Thomas before adding a 21-yard field goal from Eddie Jewett with 5:29 left to account for the final margin.

Ferris State ran for 330 yards rushing in the game while adding 215 in the air. The Bulldog defense produced eight sacks and limited WSU to only 15 yards rushing on 29 attempts.

Former Dowagiac standout Caleb Murphy had a pair of tackles and 1.5 sacks. Murphy now has 18 sacks on the season, a Bulldogs record. Murphy leads all of Division 2 in that category.

The Bulldogs are expected to receive their eighth consecutive NCAA Division II Playoff berth and are likely to host a first-round playoff game Saturday, at Top Taggart Field. The official NCAA selection show will air live at NCAA.com at 5:30 p.m. today.