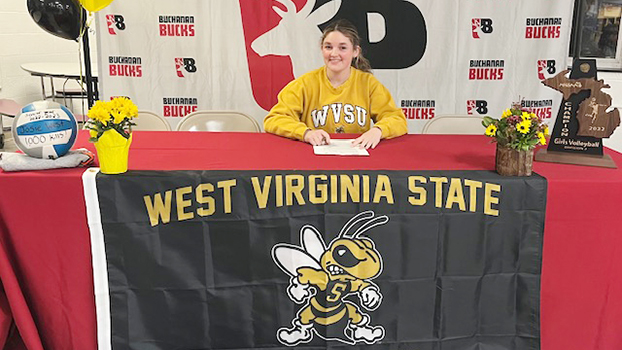 BUCHANAN — Local area athletes are solidifying the next steps in their academic and athletic careers by signing national letters of intent.

With the fall signing period opened up, several area players have already announced which schools they have selected, including Buchanan senior Josie West, who has signed an NLI with West Virginia State University where she will play volleyball for the Yellow Jackets.

West helped Buchanan to the Division 2 Regional championship match, where the Bucks were defeated by No. 5-ranked Grand Rapids South Christian 3-1 Thursday night. The Bucks were playing in their first regional final since 2016 when they reached the Class B state semifinals before being defeated by eventual state champion North Branch 3-2.

West will be an outside hitter for West Virginia State University Head Coach Kris Kern. The Yellow Jackets play in the Mountain East Conference.

West Virginia State is currently 25-5 on the season and was 12-4 in conference play. The MEC Championship Tournament begins today.

West plans to major in pre-med and go into dermatology.

Local athletes who have signed their national letters of intent are encouraged to submit a photograph and information about their signing to scott.novak@leaderpub.com for publication.