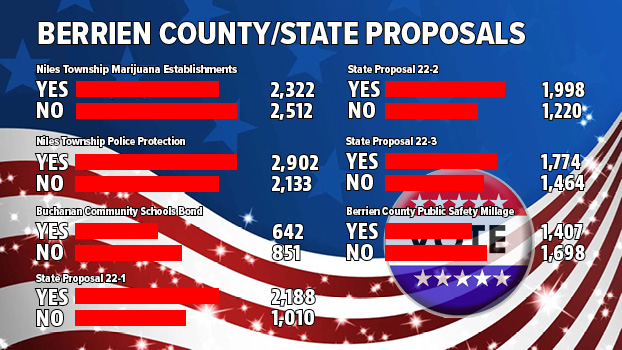 NILES CHARTER TOWNSHIP — Voters turned down a proposal that would have allowed marijuana establishments to set up shop in Niles Charter Township limits and passed a millage that will provide the community with an increase in police protection.

The Niles Charter Township Marijuana Establishments Ordinance would have repealed in part current law barring marijuana establishments from doing business in the township.

The bond proposal failed, with 2,512 “no” votes and 2,322 “yes” votes, according to unofficial results from the NCT clerk’s office.

The ordinance would have allowed for eight types of licenses within the township, including a minimum – not maximum – number of establishments in the township for each type of license, ranging from a minimum of four (grower, processor and retailer), three (microbusiness or Class A microbusiness, designated consumption) and one (secure transporter facility, safety compliance facility). However, the language does allow the Township Board to enact police power and zoning ordinances that set a maximum number of such establishments to be allowed within the Township.

While the marijuana ordinance came up short, the township’s Police Protection Proposal passed overwhelmingly to the tune of 2,902 “yes” votes to 2,133 “no” votes.

The proposal states that one mil – levied for a period of four years from 2022 to 2025 – will collect revenue via the township’s tax rolls and would generate approximately $500,000 to be used to hire additional police officers.