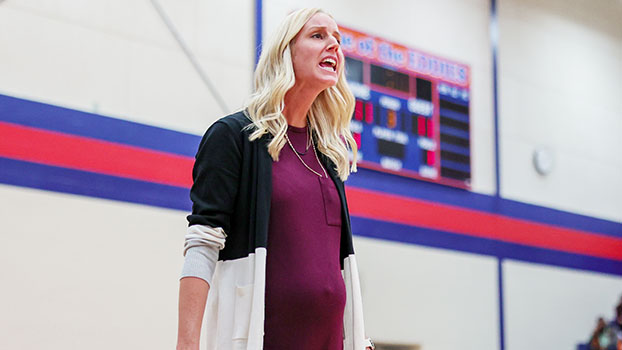 Buchanan Coach Shelly Bossert was an assistant for the Bucks the last time they played for a regional championship. Thursday. Bossert will lead the Bucks into the title match against South Christian as the Buchanan head coach. (Leader photo/JEFF DOUGLAS).

The Bucks, who defeated Wolverine co-champions Edwardsburg and Niles to win the Division 2 District championship last week, swept Plainwell 25-17, 25-13 and 25-11 Tuesday night to advance to the finals where they will face No. 5-ranked Grand Rapids South Christian at 6 p.m.

Buchanan (31-5) will be playing in its first regional championship match since 2016. The Bucks defeated Vicksburg to win the Class B title. Buchanan advanced to the state semifinals before falling to eventual state champion North Branch 3-2.

“I thought we played well tonight against Plainwell,” said Buchanan Coach Shelly Bossert. “We played consistent throughout the night, which helped us keep our momentum during the whole match. I thought Riley Capron played really good defense for us, and I thought Josie West and Chloe Aalfs did a really good job at putting the ball away. Faith Carson was a key blocker and hitter tonight as well.”

Bossert said that her team will have to raise their game another notice against the Sailors.

“In order to beat GR South, we need to play faster and be more aggressive,” she said. “I’m excited for our match on Thursday.”