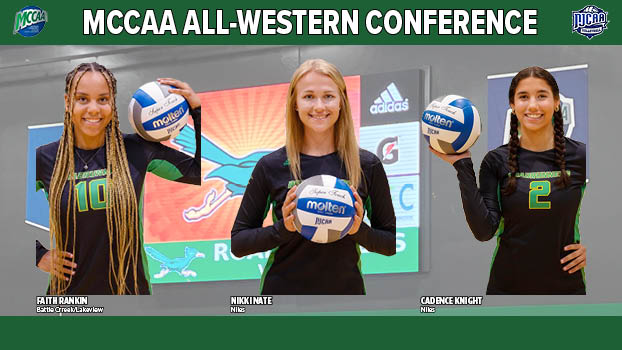 DOWAGIAC — The Southwestern Michigan College volleyball team had quite a first season.

The Roadrunners, who returned to the court after a 26-year absence, sent 14-20 overall and 5-7 in the Michigan Community College Athletic Association Western Conference, which was good for fourth place.

Southwestern Michigan qualified for the National Junior College Athletic Association Great Lakes District A Tournament, which was is one of the national-qualifying tournaments for the NJCAA. The Roadrunners won their play-in match against Schoolcraft Community College 3-2 and went on to go 2-2 in the tournament before being eliminated.

The postseason accolades are beginning to roll in and the Roadrunners had several players earn MCCAA honors.

“I am thrilled that as an all-freshman team, coming back after 26 years without sports, we were able to have three players make the all-conference team — Faith Rankin (first team and all -freshmen team), Nikki Nate (second team), and Cadence Knight (second team and all-freshmen Team),” SMC Coach Jenny Nate said. “These three players were leaders on the court this year – both offensively and defensively.”

Nikki Nate and Cadence Knight, both of Niles, were named second-team All-MCCAA Western Conference. Knight was also named to the all-freshman team.

Nate and Knight both played in all 34 matches this season.

“Nikki and Faith are both six rotation players who lead our team in scoring and bring energy and leadership to the court,” Nate said. “They are adept at finding ways to score when we really need to put the ball down. Nikki leads our team in kills, blocks, hitting percentage, and is second in digs behind Cadence. Faith leads in kills per set, is second in kills and hitting percentage, and is third in digs. Cadence leads our team in digs and is the general of our backcourt. Her defensive focus, prowess, and composure helps our entire team have a sense of trust during our matches.”

The awards are the icing on the cake as the Roadrunners wrap up their first season and begin looking toward season No. 2.

“We are incredibly proud of these three leaders as well as our entire team for a fourth-place finish in the conference as well as a post-season run in the Great Lakes District A Tournament,” Nate said. “I couldn’t have asked for a better team to represent and help begin building the SMC volleyball program and culture. They are taking a little time to rest, and then we will be hitting the gym and court hard to continue adding to the momentum we built this season.”