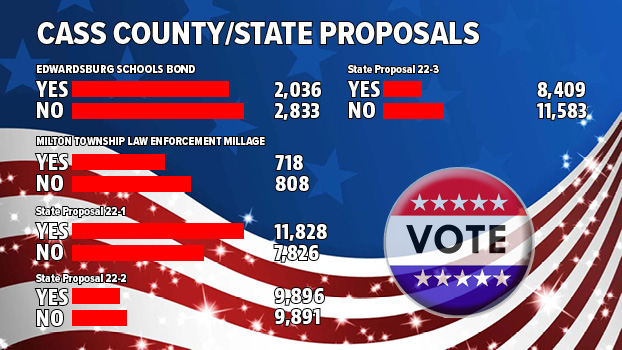 CASSOPOLIS — With nearly 98 percent of the precincts reporting, several local and state proposals are locked in tight battles as of 12:3- a.m.

In Cass County, the Edwardsburg Public Schools Bonding Proposal is losing 2,833 to 2,036.

The Milton Township Law Enforcement Millage is losing 808 to 718.

State Proposal 22-1 winning 11,828 to 7,826. The proposal would amend the state constitution to require annual public financial disclosure reports by legislators and other state officers and change state legislator term limit to 12 total years in legislature

State Proposal 2 is keading 9,896 to 9,891. This proposal would amend the state constitution to add provisions regarding elections.

State Proposal 22-3 is losing 11,583 to 8,409. This proposal to amend the state constitution to establish new individual right to reproductive freedom, including right to make all decisions about pregnancy and abortion; allow state to regulate abortion in some cases; and forbid prosecution of individuals exercising established

carry out all decisions about pregnancy, such as prenatal care, childbirth, postpartum

to protect a patient’s life or physical or mental health;

individual, or a person helping a pregnant individual, for exercising rights established by