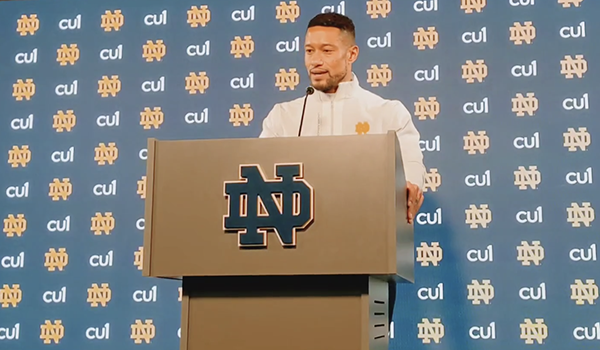 FREEMAN: Man, I wish I could get up here and just say we’re happy with the win, and this is a special one.

It’s not every day you get the opportunity to play in this place, jam packed with those fans and have an opportunity to beat a top five team in the country. It’s really special.

I’m so proud of our guys and the way they continue to trust us coaches. They do exactly what you ask them to do. That’s what makes them so special.  They’re willing to do whatever you tell them to do to help us have success. It’s an honor to coach them. It’s special. You can hear those fans, the students. I really didn’t want to leave that field.

tonight, tomorrow, and then at some point tomorrow get back to work and get ready for Navy.

This is a special win for me and for this football program.

Coach, Clemson’s defensive line, certainly one of the best defensive lines in the country.  At what point did you realize that you were in a position to physically dominate them?

FREEMAN: You know, I don’t want to say we physically dominated them, but we knew going into it, Tim, that we had to run the ball. You look at every game that we have won, I think we rushed the ball 40 plus times.

That’s been our backbone. We knew this defensive line was special, but we couldn’t

shy away from our strength. It was a challenge to our offensive line, to our quarterback, our running back. But their confidence rose and they said, listen, we can block anybody in the country, and they showed they could do that tonight.

Why tonight for this group?

You know what? I wish I could explain exactly how this season has gone. You can’t. You know, it’s never as you foresee it on the front end. You know, I think you look at a game, it’s never – we didn’t foresee this game going that way, this season going this way. Shoot, as an adult you don’t see life on the front end exactly going the way you dreamed. But you know what? I’m happy that the kids continued to believe in what we’re doing, and today was one of those special moments.

Today was the day it all came together and they were able to truly execute. They really prepared their tails off. I think tonight was a reflection of the way they prepared.

You were one of the first ones up the tunnel into the locker room. To have a quiet moment before the players and everybody else gets in, what’s your first thought as you exhale?

FREEMAN: I don’t know. I haven’t been able to yet. George didn’t let me stay on the field as long as I wanted to, he said, get out of here.  I hugged the coaches because usually we go straight and we call up and we say our post-game announcement and move on.

On special teams, I know you want to be aggressive every week, and being that this was kind of a battle of two special teams units, how much of an emphasis and then just a boost was it to get that kind of special teams play early on?

FREEMAN: Yeah, he did it again. That group did it again.  Kudos to Coach Mase and his hard work and preparation. You know, I challenged that group yesterday. I said, listen, you won’t surprise anybody. Everybody in the country knows you’re coming after a punt. When you find

ways to execute and you find ways to play with relentless effort, it doesn’t matter if a team knows you’re coming after a punt or not.

That’s why I’m so happy for this group. Everybody knows we’re coming after punts. For them to go out and be able to execute, we’re not tricking anybody. It’s about the way we teach it and the way they go out and they execute, and today was a great job by the punt block unit.

FREEMAN: You know, it’s tough because you have some moments in your office by yourself that you got to take a deep dive into yourself, like what are you doing? What do you have to do to get this thing changed?

You have to believe in what you’re doing.  When I’m in front of that group, you got to be the most confident individual that they’ve ever seen. If their leader gets up there in front of the group after a loss or we don’t play well with their head down, what are they supposed to think? So I make sure when I walk out of my office I’m the most confident leader that I can be. They need that. They will go as their leader goes, and I have to do that.

Listen, there are times, as we all have where we’re by ourselves in solitude and have to reflect and talk to ourselves a little bit. But I think the thing I learned is that what I said earlier, is that it’s never how we foresee it on the front end.

If you go on to win a national championship or if you’re, what are we, 6-3 and you lost a couple games that you didn’t believe you would’ve at the start of the year, but you can paint a beautiful picture.  You can make this thing the way you want as long as you continue.

You can’t just – as I told the guys, this is a spiritual school. We can’t just pray and think things will magically change. We play, but you have to put in the work and be very intentional. Saying we’re not just trusting the process, we have to fix it and attack the deficiencies that we have.

That’s going to be the challenge, even after today.

After a great win like this, are we still willing to go and take a hard look at ourselves and say, how can I improve as an individual? After a win over a top five program, can we still be selfless? Can we tune out all the outside noise? It’s easy to tune it out when you’re not winning because it’s all negativity.

The challenge to this group is can you tune it out right even right now when somebody might pat you on the back and say, you’re doing a great job.  Continue to stay focused and continue to work on the things that we know it’s going to take for us to improve, because that’s the challenge every week to improve.

You referenced the selfless, so you’ve got wide receivers that are not necessarily getting a bunch of balls on their way, but they’re still blocking. You have three different running backs all carrying, and you got veteran DBs, congratulating Ben Morrison after his

pick six, what do you attribute that to, and what are the benefits now and long-term for that?

FREEMAN: To the coaches, those positions coaches that every day are with them and continue to reinforce that message. To the type of kids we have. You know, Notre Dame attracts a special individual, right? It takes a selfless individual to thrive in a place like this that understands it’s bigger than yourself. I think that’s the beauty of being here. We got a whole

bunch of kids that want to be national champions, first-round picks, but they’re selfless and they understand about the bigger picture, that it’s bigger than themselves.

That’s why it’s a joy to coach them. Every day those position coaches have to reinforce that message.

How does Ben Morrison put himself not only in position, but come through with two huge plays?

FREEMAN: Just a mentally tough kid. Got a PI called against him and comes back and gets an

interception; and got a ball caught on him and then comes back and gets a pick six.

You know, credit to his parents. He has a special set of parents. Dad played in the NFL for a while, but also he is a minister and helps him spiritually and mentally stay in the

His mother is just an incredible woman that has raised a couple gymnasts and it’s, to me, a reflection of his upbringing. He’s an ultimate competitor that doesn’t get shaken. It’s really uncommon for a freshman to be like that.

How much did the defense’s ability to limit Clemson offensively impact what you guys were able to do on offense and be able to control the ball?

FREEMAN: Yeah, took a lot of pressure off them to start the game; go up 7-nothing after a punt block, offense kind of ran the ball a little bit; had a couple punts. And then to go up and score before the half, right? To go up 14-0 in that middle eight period, and it was huge.

Now as the defense continues to force Clemson to punt, the offense doesn’t feel that pressure.  “We have to score.” Our defense came up huge today. Again, I’m proud. They have done a really good job all year. I’m proud of that group and those coaches.

I think it was couple weeks ago you talked about you can’t just build on what was done here before; you had to do it your own way.  Is this proof of concept for that, and when you talked about how you have to project confidence, how significant is tonight for you where projecting it is going to be a lot easier now? You don’t have to talk yourself into it.

Yeah.  I mean, to answer the first part of your question, absolutely. This is still a part of a

new foundation, right?  You can’t just change leaders and think, as I said, it’s going to continue to do like this. We have to build this foundation the right way. And so we believe it becomes infallible. You got such a strong foundation, man, that no matter what happens, man, you’re going to be solid. What was I going to say? There was a second part of that question.

You talked about how you talk to yourself.

Yeah, as I told the team, winning does two things for you in my mind:  It gives you that

feeling, right, that’s it’s hard to reciprocate. The feeling of being a winner. It’s short-lived, especially here. Next week we got to get ready to go.

For tonight and tomorrow morning you have that feeling. It’s one of the greatest feelings in the world, but confidence and belief in what you’re doing. It reaffirms the process, the things that you teach. But the challenge will be, as I said to this group last week, the challenge will be those lessons that you gained when you lose, right, the failures – it’s easy to look at yourself and say, how can I get better and what do I have to do as an individual, and how can we tune out the outside noise and be intentional in our work? Those are things that are easy to do when you lose.

The challenge will be when we have success to continue to have that mindset of improvement and selflessness and continuing to just stay together.

What can Drew Pyne get out of tonight? How can this boost him the rest of the way?

Man, he’s a winner, and he has to be unselfish and continue not to look at stats, just look at,

“Do I do the things necessary for us to win?” And he did. He took care of the football. When we decided to throw the ball he did. He took some shots. Really ran the play clock efficiently. There are a lot of the things he’ll be able to build off from this one, and he’s doing a great job leading