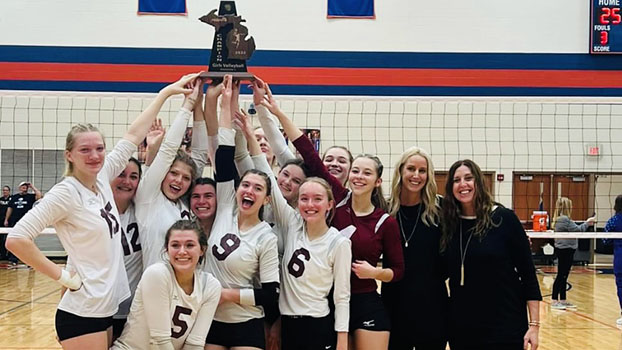 The Bucks, who reached the title match by defeating Wolverine Conference champion Edwardsburg 3-1 on Thursday, won the opening set to the Vikings, who cruised into the finals with 3-0 wins over Berrien Springs and Benton Harbor, 25-15.

The win advanced Buchanan to the Division 2 Regional semifinals at Hudsonville Unity Christian High School to face another Wolverine Conference team in Plainwell at 7 p.m. Tuesday. In the first semifinal at 5 p.m. will pit No. 8-ranked Holland Christian against No. 5-ranked Grand Rapids South Christian.

“This final district match was a battle,” said Buchanan Coach Shelly Bossert. “My girls really fought for every point we got today. My team just never gave up. I am extremely proud of this group. They worked together as a team to win an intense game on Thursday and then they turned around and did it again today.”

First-year Niles Coach Samantha Zimmerman was pleased with her team’s effort throughout the season and in the postseason.

“It was sad to have our season end today, but I reminded my girls of how far we’ve come this year,” she said. “We started the match very slow, and I think that affected us throughout. We came back and played an amazing set 2, but then again, sets 3 and 4 were just slow for us, and it’s hard to win when our energy level isn’t at its best. Buchanan has some great hard hitters. Our blockers just couldn’t slow them down enough today. I thought we played a good match and I’m happy with how far we’ve come this season.”