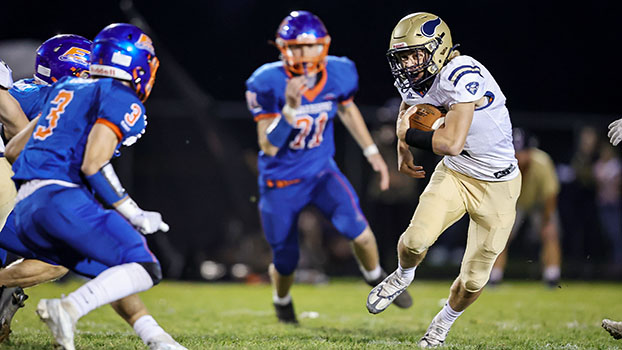 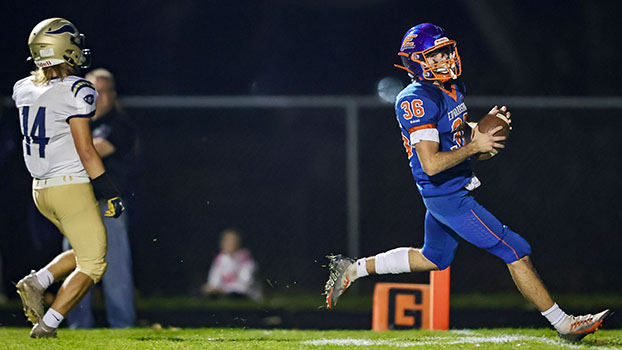 Edwardsburg senior Mikey Pryor (36) goes in for the touchdown Against the Vikings. (Leader photoJEFF DOUGLAS) 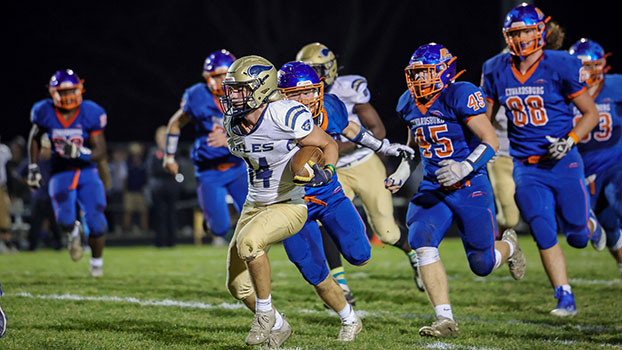 Niles sophomore Sam Rucker (14) gets a big first down in the first half of the MHSAA District Championship game. (Leader photoJEFF DOUGLAS) 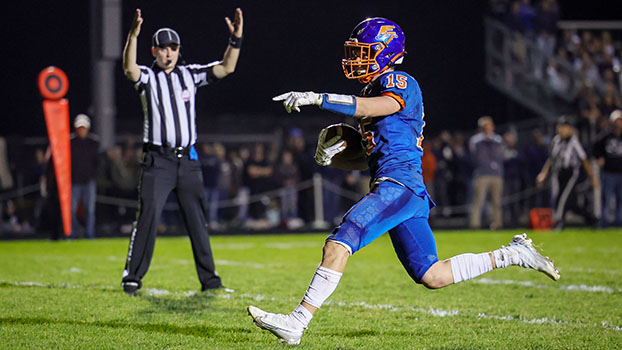 Edwardsburg senior Brett Allen (15) scores in the first half of the matchup with Niles. (Leader photoJEFF DOUGLAS) 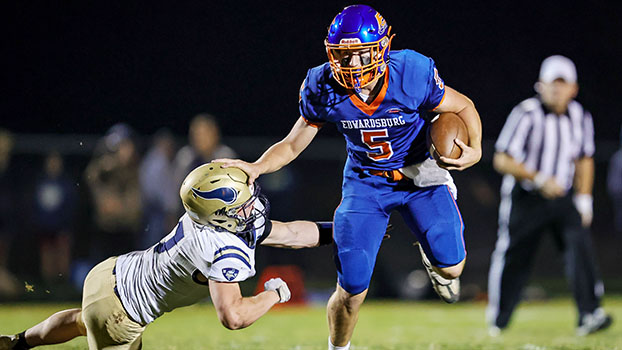 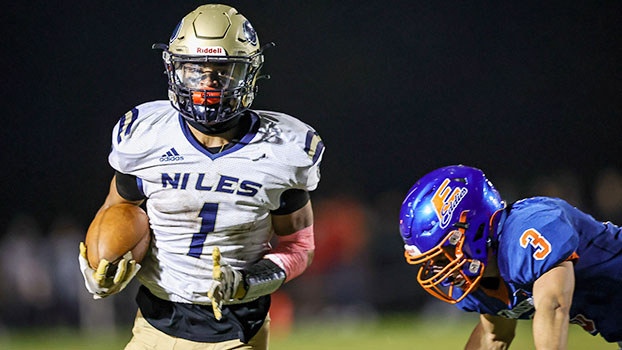 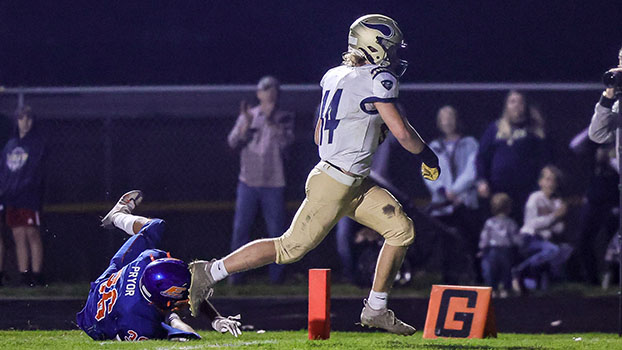 Niles' Sam Rucker (14) goes into the end zone in the first half. (Leader photoJEFF DOUGLAS) 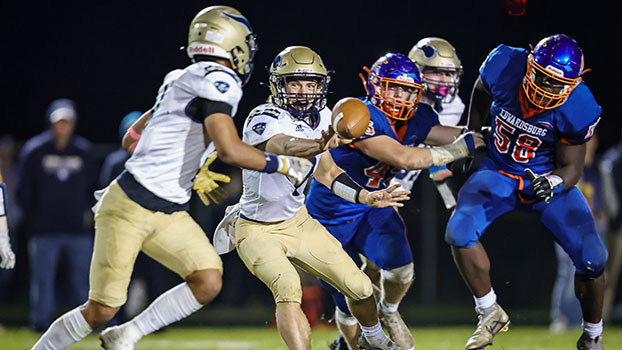 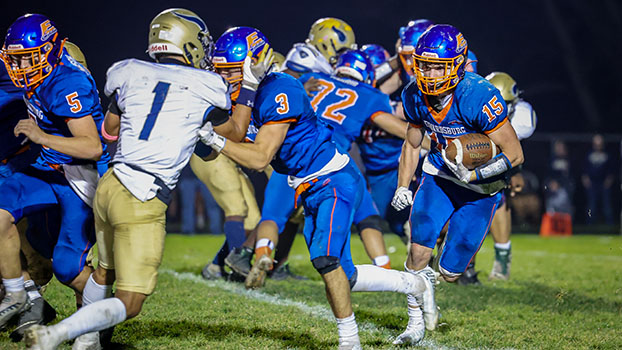 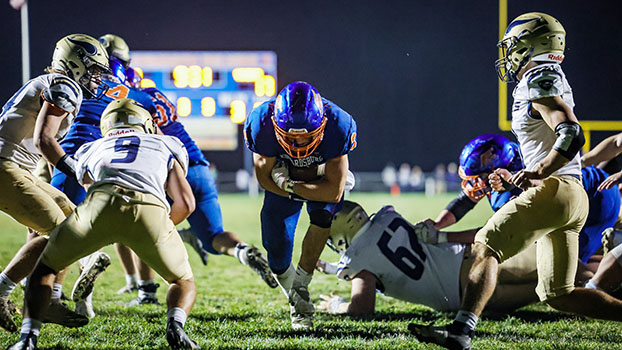 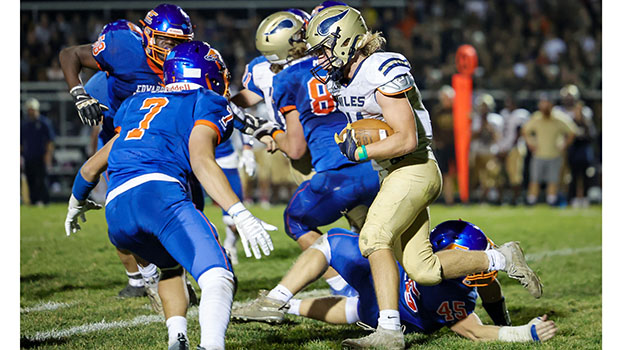 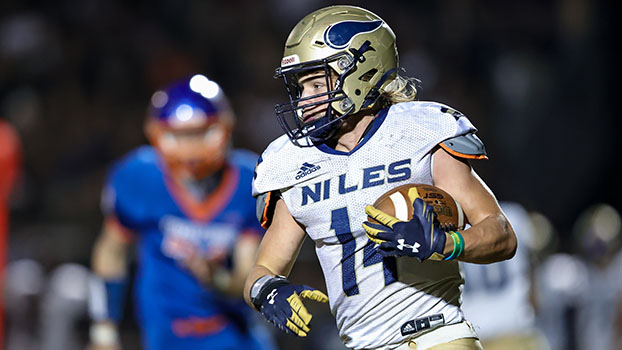 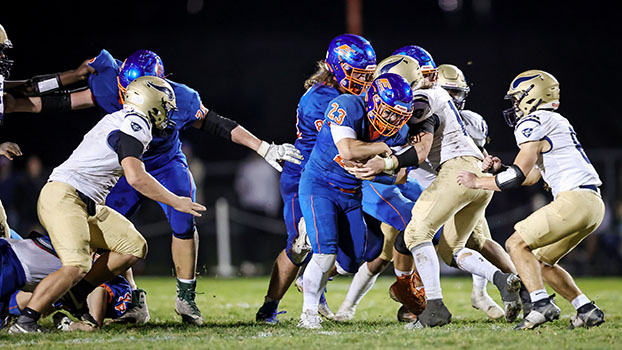 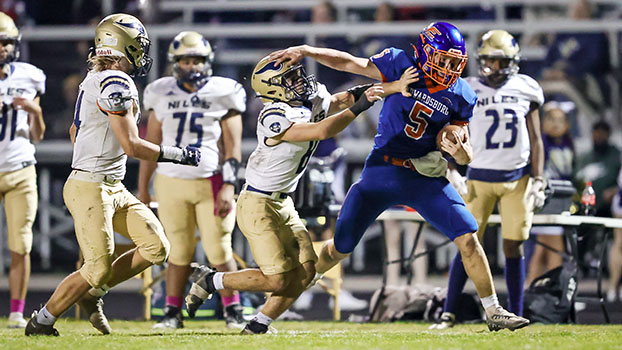 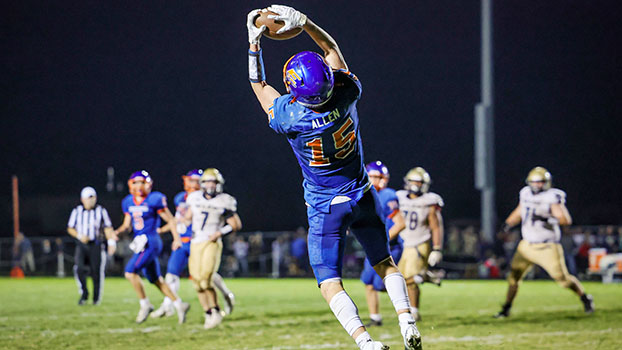 Edwardsburg senior Brett Allen (15) makes the catch on 4th down to secure the win for the Eddies over Niles. (Leader photoJEFF DOUGLAS) 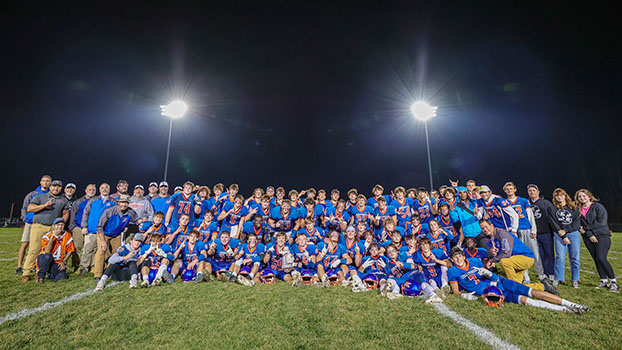 EDWARDSBURG — Fans lucky enough to attend the Division 4 District Finals game between Edwardsburg and Niles Friday Night were treated to a heavyweight slugfest.

In a game that saw Edwardsburg on the ropes, the veteran Eddies came from behind to best the Vikings 24-17.

“We’re obviously a senior-dominated team, we’ve done this a few times,” said Edwardsburg coach Kevin Bartz. “(Niles) has a lot of young and very aggressive players, and I do think it came down to the end. We had a lot of kids who were banged up who still stayed in and gutted it out for us. We made the plays when we had to.”

Leading 16-3 midway through the first half, a Sam Rucker 18-yard touchdown run cut the deficit to 16-10 at halftime.

In the third quarter, Rucker capped a scoring drive with his second touchdown run to give the Vikings a 17-16 lead and a chance to earn their first-ever district championship.

When the going got tough for the Eddies, Andrew Colvin got going.

In the fourth quarter, the Edwardsburg senior — nursing a sprained shoulder sustained in the game — scored the game-winning touchdown and followed it up with a game-saving one-handed interception on defense to allow the Eddies to run out the clock and escape with a victory.

“My mind went blank,” Colvin said. “I just did what I’ve done all year and made a play.”

“He made that huge defensive play and picked up some huge first downs for us,” Bartz said. “It was a do-or-die situation for us and he made plays.”

On defense, Allen led the team with 8.5 tackles and Jacob Edwards had one sack, while Colvin added four tackles and the interception.

For Niles, Talon Brawley completed 2 of 6 passes for 26 yards and Sam Rucker carried the ball 8 times for 60 yards. Julian Means-Flewellen and Paul Hess each had 36 rushing yards, respectively.

Edwardsburg outgained Niles 321-184 in total offense. Both teams had success making plays on fourth down, with Niles converting 4-of-5 and Edwardsburg 3-of-5.

Colvin wasn’t the only Eddies player who fought through an injury Friday night, as several Edwardsburg players felt the presence of a bigger, more physical Niles team, unlike the one Edwardsburg, routed 45-7 in Week 2.

“They went after it every single snap,” Colvin said. We watched film earlier this weekend, and I mean, instantly, all of us were like, ‘wow, where did that come from?’ They were just physical; they wanted it and we wanted it more. They had a chip, and since we played them last time, the chip got bigger and bigger. We found out tonight.”

“We have to give Niles a ton of credit,” Bartz said. “We played them in Week 2, and nine weeks later, they’re a completely different football team. We knew it was going to be a much better game this time. They matched our physicality, and that’s not something many teams do.”

While many may have been surprised by Niles’ performance, head coach Scot Shaw knew his team had a chance to win. The Vikings had won five in a row after a 1-4 start to the season and were outscoring opponents by an average score of 47-13.

“We talk about a standard that we want to set for Niles and one of those is being physical,” he said. “We want to meet that standard every game. I think we kicked their fanny up front at times and they got us at times… Tonight we told them, ‘we’re here and we’re going to make you earn it,’ and I think we did. If it’s not already, that’s going to be our trademark. We’re going to tattoo people.”

While the loss was a bitter pill to swallow, Shaw believes the game was a sign of positive things for the Vikings, who will lose eight seniors to graduation and return the bulk of this year’s team.

“You could call this a building block,” he said. “They’re a good team and we took them down to the wire.”

The 11-0 Eddies will host the 10-1 Saxons of Hastings next week in the Division 4 Regional finals. Hastings is coming off a 23-13 win over Charlotte to win its first district title.

“We came in knowing we had a possibility of three home games,” Bartz said. “For these guys to get all three means a lot. Hopefully, we don’t finish our year here. Hopefully, we see the game after that. I’ve known most of these guys since they were seven years old, so it’s gonna be a tough group to say goodbye to when the time comes.”

A rivalry on the rise?

Edwardsburg is no stranger to big stages, having played several championship-caliber games in recent years. Even so, Bartz admitted that Friday’s matchup against the program down the road produced a special atmosphere unique to local communities.

“It is different,” he said. “With Niles being our neighbor, we’ve got that natural rivalry whether we played each other that much the past few years or not. The kids know each other, (Niles) brought a fantastic fan base, their program is greatly improved, coach Shaw is doing a tremendous job. I think it’s going to create a very exciting rivalry, and it is a lot of excitement. I don’t know the last time I saw that many fans on the visiting side, so it brings a great atmosphere for us here.”