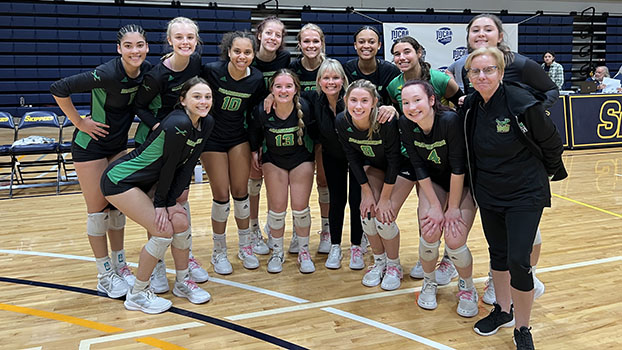 The Roadrunners played their way into the National Junior College Athletic Association Region XII Great Lakes District A Tournament with a 3-2 win over Schoolcraft at St. Clair County Community College.

Southwestern Michigan enters the District A Tournament, which is a qualifier for the national tournament, as the No. 7 seed. The Roadrunners faced No. 1 seed Grand Rapids Community College Thursday night.

The Roadrunners won the opening two sets against the Ocelots, 25-19 and 25-18, but could not maintain their momentum as an injury to Faith Rankin (Battle Creek/Lakeview) forced SMC Coach Jenny Nate to make some changes to her line up.

Schoolcraft won the next two sets, 25-16 and 25-18, to set up a fifth and deciding set. In the fifth set, the teams went back and forth with Southwestern Michigan finally pulling out am 18-16 win to advance.

“This team has fought so incredibly hard to get here since the day we started our season,” Nate said. “They are an intense, determined, resilient group of all freshmen who can beat any opponent when they play with confidence, trust, energy, and remember to have fun out there. We have learned to play through so much adversity the past couple months, and they have truly embraced being the underdogs. It makes them fight that much harder.

“Tonight, Faith Rankin went down with a back injury, and despite a sudden lineup change, they rallied together to pull out the win; and it was a point for point battle. I reminded them that this is what great teams do — they find a way to win no matter what circumstances they face. I told them in the fourth set that they we were going to win this match and that it would be a great story. And they did exactly that.”

The Roadrunners (13-18) got a solid performance from its “big four” up front. Bianca Hobson (Loy Norrix) led the way with 14 kills, while Nikki Nate (Niles) had 13 kills and Rankin 12 before departing with the injury. Amara Palmer (Niles) finished with 10 kills.

Palmer, Nate and Hobson all had four blocks, while Edwardsburg’s Shayla Shears had three blocks to go along with eight kills.