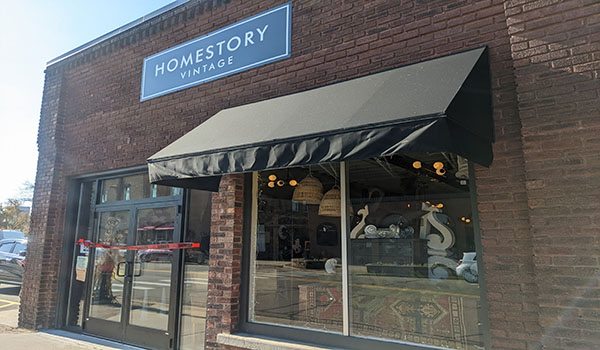 NILES — A local business was forced to close 30 minutes before its grand opening on Wednesday due to a pending electrical inspection.

Homestory Vintage, 218 N. Front St., Niles was forced to close its doors Wednesday morning – 30 minutes before its scheduled grand opening – after a city-contracted electrical inspector stated the final inspection had not yet been completed.

A red ribbon of “danger” tape adorned the doors to the building, and customers eager to shop at the new store were turned away and asked to return at 11 a.m. Thursday for a rescheduled opening.

“I’m devastated,” said Homestory Vintage owner Cat Dobecki. “My grand opening was ruined. Things could have been handled differently. I appreciate our customers’ support and I look forward to seeing them soon.”

Attempts to reach the inspector – identified on the code sticker as Ron Bellaire – were unsuccessful.

The news was a surprise to the Dobeckis, who were told by their contractor that all inspections had been completed and approved.

“It was just a misunderstanding all around,” said Cat’s husband, Dan. “I feel like it could have been explained to everybody a little sooner than 20 minutes before the doors open. But if it needs to be done, we’ll do it.”

The issue caused frustration for family members, as well.

“She rents this building, she doesn’t own it,” said Cat’s mother, Jean. “It wasn’t her responsibility to do the electrical, to do the plumbing, to get the contractor to have everything set up to do the inspections. She’s a small business owner who is taking the brunt of the failure of the system. It’s not fair, because now she’s paying for it. With her reputation, her money and her future business because the ball got dropped.”

Dan said they are in the process of getting everything set to open tomorrow, but the news diminished what should have been a day five years in the making for Cat.

“Obviously it ruined it for her,” he said. “We’re going to push through this and we’re going to open hopefully tomorrow, and everything is going to be great.”