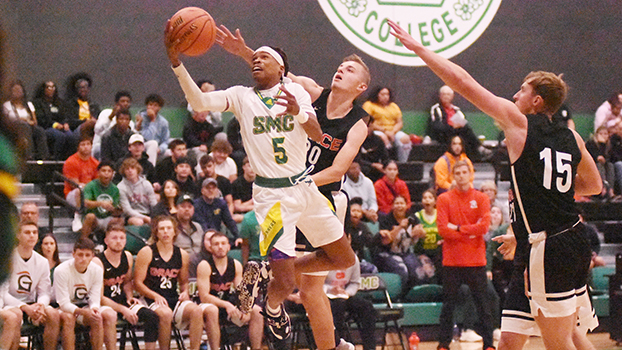 DOWAGIAC — The exhibition games are over and it is time to put the weeks of preseason practices to work as the Southwestern Michigan College men’s basketball team will open its 2022-23 season tonight at the 1st Source Bank Fieldhouse.

It has been 26 years since the Roadrunners fielded a men’s basketball team. After successfully reviving its athletic program with cross country in 2021, Southwestern Michigan College added volleyball, men’s and women’s basketball, along with wrestling starting this fall.

The Roadrunners men’s basketball team, under the direction of Head Coach Rodell Davis, has already played four exhibition games in preparation for tonight’s season opener against Andrew University. Tipoff of the second game of the season-opening doubleheader is set for 7:30 p.m.

Davis said he likes how hard his team plays at both ends of the court.

“What I really like about this team is its intensity,” he said. “We really get after it on the defensive end. I didn’t know how that would translate from practice to a game, but I was very pleased with how hard we play at the defensive end of the court.”

Following the exhibition game against the Grace College JV, Davis said he realized that he played several players too many minutes, which showed late in the second half. He used the remaining exhibition games trying to build confidence in his bench so that the starters can be fresher when needed when the game is on the line.

“They are more than capable,” Davis said about his bench. “I have to get them out there early in the game, so they can get their feet wet and be ready to go for the remainder of the game.”

Davis said fans can expect a fast-paced game from the Roadrunners.

“We want to push the ball up the court and try to score in the first seven seconds,” he said. “If we can’t do that, we will be patient and get a higher percentage shot. They should be looking for an up-tempo type game.”

Davis said he has plenty of potential scorers on his squad. He expects them all to contribute throughout the course of the season.

“It will be a different guy every night that leads us in scoring,” he said.

The Roadrunners will wrap up their six-game home stand against Muskegon Community College Dec. 3.