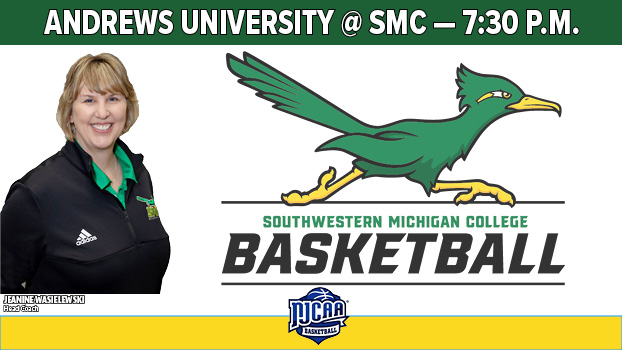 The Roadrunners, after playing a series of exhibition games, will tip off the 2022-23 season at 5:30 p.m. The SMC men’s basketball team will play the second game of the doubleheader against Andrews University at 7:30 p.m.

The first Roadrunner women’s basketball team has a strong local flavor. Southwestern Coach Jeanine Wasielewski signed seventh players from southwest Michigan to go along with six players from the region.

Palmer will not play in the opener tonight as she is also a member of the SMC volleyball team preparing to compete in the National Junior College Athletic Association Division II Great Lakes District A Tournament on Wednesday.

Bond is a transfer from Terra State and the squad’s lone sophomore.

Wasielewski started the preseason by taking her team to Chicago to compete against several teams after just six days of practice. Some felt it might be too much for the young and inexperienced squad. She wanted to find out just what kind of players she had recruited.

“We have one player with a tiny bit of college basketball experience,” Wasielewski said. “So, for all practical purposes, we have 11 freshmen. The more experiences they can get playing other players at this level was just too beneficial before Nov. 1 when it really starts counting.”

Wasielewski said she might have learned more than her players.

“They got a lot out of it, but I learned a lot about them as individuals,” she said. “I learned about who was working together at that point just six days in. We want to play fast. Do we have the ability to play fast with teams that are just as athletic and as skilled as we are? What kind of shape were we in after just six practices?”

Wasielewski also said her team got a little tougher, which she would not have been able to get practicing her squad against each other.

Wasielewski is no stranger to big-time college basketball, having played at Northwestern University, where the Wildcats won the Big Ten Conference championship and made a couple of appearances in the NCAA Tournament. She has also been an assistant coach at the Division I level at the likes of Loyola University Chicago and Penn State University.

She said that being the head coach at a junior college is a little bit how she expected it to be.

“I expected to have to spend a little bit more time teaching the basketball game and that is happening,” she said. “I have a lot of potential sitting on the team with not the level of skill development and basketball IQ I am used to coming into college. But I knew that because I recruited them and I watched them play. I talked to them on the phone.”

Wasielewski said that having to show her players elements of the game has been fun because she enjoys teaching the game of basketball.

ˆThat is how I like to coach anyway,” she said.

One of the biggest things she learned about her team during the preseason, and perhaps one of the most important things, is the level of desire her squad had to be successful.

“We really have players that want to compete,” she said. “They were on the floor after loose balls. They were made about the scoreboard, even though I was not as concerned about it. Are chemistry was way ahead of where I thought it would be, considering hardly any of them have played together.”

Southwestern Michigan will then play four consecutive games at the 1st Source Bank Fieldhouse to wrap up November and begin December.