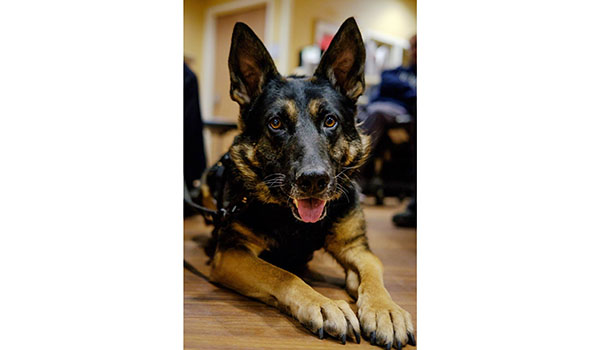 DOWAGIAC — A local law enforcement dog has called it a career.

The Dowagiac Police Department announced that K-9 Tole, a dual-purpose working dog, has officially retired as of Monday, Oct. 31 following a six-year career with the department.

According to the DPD, K-9 Tole was purchased with a generous donation from Starks Funeral Homes in 2016.

A dual-purpose working dog, K9-Tole was trained and certified through the National Association of Professional Canine Handlers. He is certified in tracking, narcotics, handler protection and area/building searches, article searches and obedience.

K-9 Tole joined the Dowagiac Police Department July 1, 2016 and was assigned with Patrolman Kevin Roman, who he lives with. The duo was assigned to the night-shift. Throughout his career, he has assisted officers at the Dowagiac Police Department, Cass County Drug Enforcement Team and several other neighboring agencies. He has detected several narcotics, including, methamphetamine, crack/cocaine, heroin, ecstasy.

K9 Tole has located weapons used in crimes including firearms and other evidence. Over the past year, he has worked alongside the newest K-9 rookie, K-9 Cash – who also happens to be his adopted brother. K-9 Tole has participated in several parades, classroom presentations and community events in Dowagiac.

K9 Tole is certified through the National Association of Professional Canine Handlers. When reporting for duty, he would wear a custom-fit vest by Spikes K-9 that is bullet/slash resistant. Donations in his honor can be made at www.spikesk9fund.org.

When K-9 Tole is not working, he enjoys playing ball, watching COPS while relaxing on the couch and road trips to grandma and prandpa Roman’s house.

K-9 Tole is now going to be taking on a new role, GoodWill Ambassador at the Police Department. He was assigned a dog bed, unlimited treats and belly rubs.