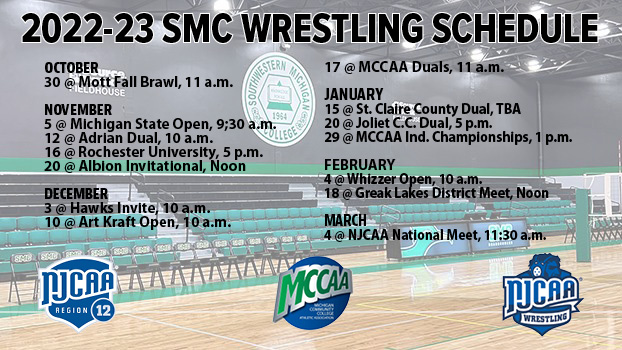 DOWAGIAC — It has been more than three decades since Southwestern Michigan College put a wrestling team on the mat.

That drought ended Sunday as the Roadrunners headed to Flint to compete in the Mott Community College Fall Brawl.

Southwestern Michigan turned to alum and former Niles Coach Todd Hesson to restore the program, which was among the nation’s best under the direction of the late Jim Judd.

Hesson wrestled for “Judd’s Studs” in the mid-1980s. Judd, who was inducted into the National Junior College Athletic Association Hall of Fame in 1994, passed away Dec. 24. 2021.

Hesson’s first team is a collection of local and area wrestlers from some of the most successful programs in southwest Michigan. It has wrestlers who have competed at a variety of level and includes recent state champion Kyle Stamply, of Lakeshore High School, and numerous state placers.

“We are off to a good start,” Hesson said of his team’s preparation for the 2022-23 season. “We are young just like everybody else [at Southwestern Michigan]. I have a team full of freshman. We are still a high school team that is going to slowly evolve into a college wrestling team. There is a big learning curve.”

Hesson likes the make-up of his team with wrestlers from smaller to bigger schools and their levels of success in the sport.

The first SMC wrestling schedule, like the Roadrunner team, has a mix when it comes to the levels of competition the wrestlers will face this season. They range from matches and tournaments against junior college teams to bigger tournaments, such as the Michigan State Open in East Lansing, which will help give Hesson’s wrestlers exposure.

“That is the one thing our conference does not have,” he said. “We do not have a lot of junior college wrestling teams, so for us, we travel into Illinois to see Triton and Joliet, but then we see Albion and Adrian [colleges}. We see a lot of Division III. The big difference there at the four-year schools is they have junior and senior leadership. We don’t have that. We will have that next year with sophomore leadership.”

Southwestern Michigan will be road warriors in its first season back on the mat as the Roadrunners do not have any home matches slated for this year.

After Sunday’s Fall Brawl, SMC heads to East Lansing for the MSU Open Saturday and then to the Adrian Dual Nov. 12 and the Rochester University Dual on Nov. 16. The Roadrunners wrap up the month of November at the Albion Invitational.