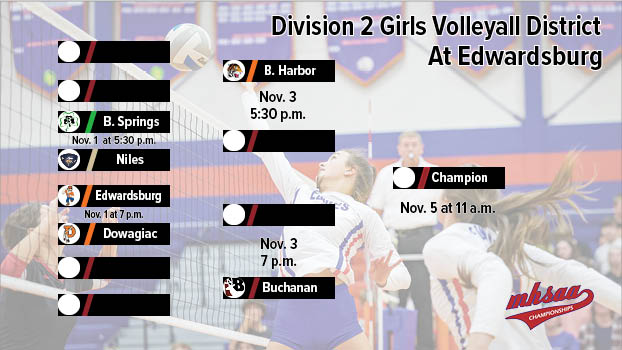 EDWARDSBURG — In one of the most competitive volleyball districts in the state of Michigan, defending champion Niles will have its hands full.

The Vikings, who went on to reach the Division 2 state quarterfinals in 2021, will begin defense of their championship against Berrien Springs at 5:30 p.m. Tuesday.

The Vikings got off to a bit of a slow start, but built momentum as the year went along and grabbed a share of the Wolverine championship by running the table after dropping an early match to the Eddies.

Niles Coach Samantha Brawley like her team’s draw as well.

“We play Berrien Springs first round, then play Benton Harbor second round, and wait to see who our opponent is for the championship with two wins under our belt,” she said. “I like playing more games and gaining momentum to get to the district finals.”

Brawley wants her team to continue playing the way it has been the last two months.

“To win the championship, we need to stick to playing our game,” she said. “It doesn’t matter who the opponent is. It is always us against ourselves. We need to focus on one play at a time and stay united as a team, because that is when we are our best. We’ve had some good practices in the last week and worked on a lot of things to keep getting better, so I’m excited to see the girls use that in some high-stake games.”

Niles is led by All-Stater Julian Bruckner, who has a .319 hitting percentage this year. She has 371 kills and 72 blocks. Bree Lake is averaging 5.9 kills per match and 1.4 blocks, while Nyla Hover is averaging 5.4 kills and 1.6 aces per match.

Kendall Gerdes averages 4.5 kills and 1.8 blocks for the Vikings. Amelia Florkowski has 414 digs for an average of nine digs per match to go along with 45 aces. Anna Johnson is averaging 14.4 assists per match.

The Eddies (22-7-5) who shared the Wolverine Conference with Niles, will face former league foe Dowagiac in the opening round of the district tournament on Tuesday. The Chieftains finished runner-up in the newly former Lakeland Conference and are 23-14-4 this season.

The two teams will square off in the second match on Tuesday at 7 p.m. In the opening match,

Sarah Strefling, who returned to coach the Eddies, would have liked to have a bye in the opening round.

“Overall, we have a tough road to the district championship, and we did lose to Buchanan in the regular season, so if we were to get past Dowagiac that will be a tough match for us or Buchanan on Thursday,” she said. “At the end of the day, though, if our goal is to be districts champs, we would have to play the toughest teams at some point; and that is our goal. Also, a huge talking point for us this season is earning our wins and not walking into matches and hoping to win off their errors. That does happen in some cases, but finding a way to earn a win by showing up and not making unforced errors.”

“The other big piece against these upcoming matches would be to block big and do our best to swing big,” she said. “It seems like common sense, but we have a tough road in our district run, and energy is going to be high in all these matches, at home for us, so we have to play smart and use our strengths [which is our size] and show up.”

The Chieftains, also with a new coach in Amber Todd, have not faced the Eddies this season, which has Dowagiac looking forward to the match-up.

“We are excited to play a team that we have not played in our regular season this year for districts,” Todd said. “Our team has made a lot of progress and improvements during this season and we are ready to play.”

Todd feels her team has what it needs to compete for the championship,” she said. “In order for us to win the championship, we need to go in with confidence. There is a lot of talent on this team and the girls need to believe in their abilities. We need to show consistency with serving, blocking, and keeping unforced errors low.”

Dowagiac is led by Caleigh Wimberley, who has 184 kills, 151 digs and 64 aces, while Maggie Weller had 167 kills and 19 blocks. Alanah Smith has 128 kills and 30.5 blocks. Brooklyn Smith leads the Chieftains with 548 assists and 46 aces, while Dobberstein leads Dowagiac with 251 digs to go along with 22 blocks and 30 aces.

The winner advances to face Buchanan, which is 28-5 on the season.

“I like that we get to continue to practice leading up to Thursday,” she said. “What my team needs in order to win the championship this week is to work together as a team, play hard, and to stay consistent.”

The Bucks, who won the Lakeland Conference title, have a huge front line like Edwardsburg. Faith Carson (middle) and Josie West (outside) are Buchanan’s top hitters, Faith, and her sister Alyssa Carson, lead Buchanan in blocking, while Laney Kehoe and West are the top defensive players.

The championship match is set for 11 a.m. Saturday.