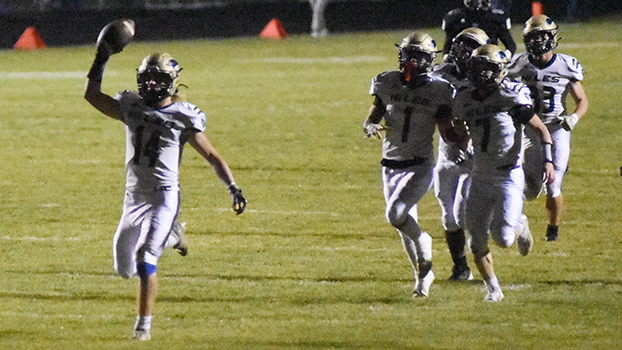 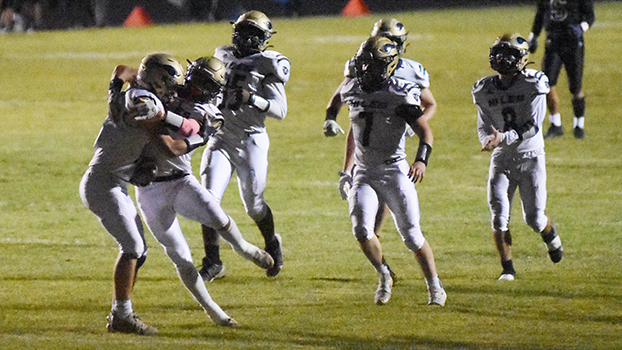 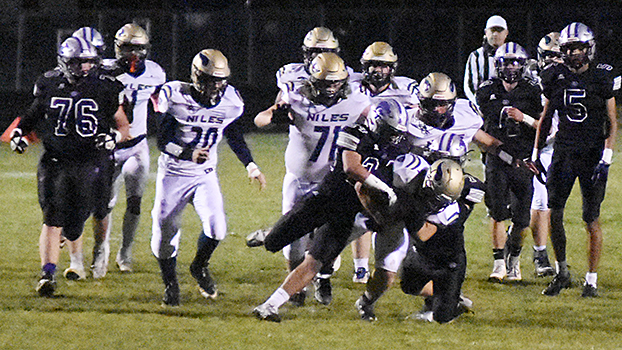 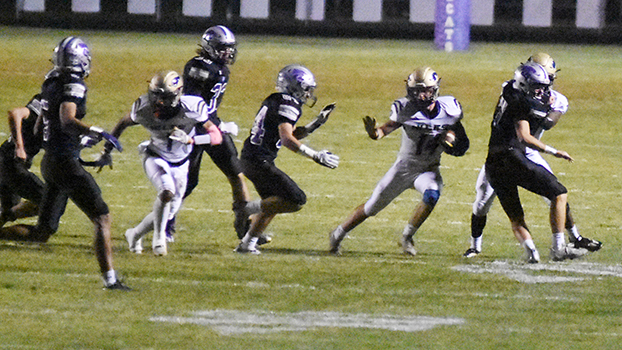 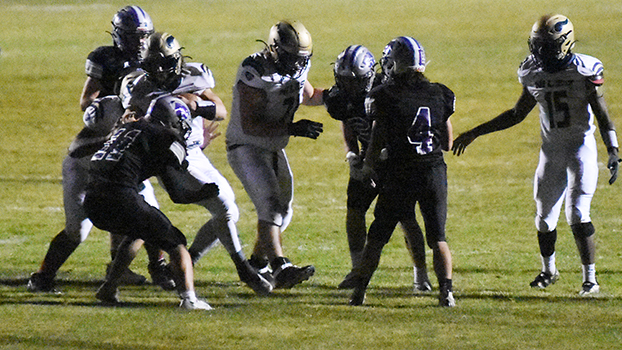 THREE RIVERS — For only the second time in school history, and the first since 2003, the Niles football team has advanced to the second round of the Michigan High School Athletic Association football playoffs.

The Vikings, whose first playoff win came 19 years ago in 2003 against Sturgis, defeated host Three Rivers 56-32 at Armstrong Field Friday night. The win avenged a 27-21 loss to the Wildcats when the two Wolverine Conference teams squared off on Sept. 16.

Heading into the game, Niles Coach Scot Shaw, who coached the Wildcats to the 2003 Division 4 state championship, believed his team should have beaten Three Rivers back in September and was eager for his team to get a second shot at the Wildcats.

Niles (6-4) took full advantage of the opportunity, leading 21-20 at halftime, and then exploding for 35 second-half points to turn the game into a rout.

“I never imagined,” Shaw answered when asked if he thought his team would score that many points on his former team. “But, after it got going, I thought we may need 56 points in order to win. We were able to make some stops, and we were able to put pressure on them offensively all night. I thought our offense played pretty well. Defensively, we just had to not give up a big play.”

The start of the game was anything but ordinary. Niles kicked off to the Wildcats, whose return man fumbled the ball, but picked it up and raced down to the Vikings’ 15-yard line. Three Rivers fumbled the snap on the first play from scrimmage but recovered the ball. Niles was whistled for an unnecessary roughness penalty giving the Wildcats another first down, this time at the Vikings’ 12-yard line.

Two running plays and a Niles penalty moved the ball to the 1-yard line. On the next play, the Vikings’ Sam Rucker grabbed a Three Rivers fumbled out of the air and returned it 94 yards for a touchdown and a 7-0 Niles lead just under two minutes into the game.

“It has been a while,” Shaw said about the crazy start. “I have seen kickoffs run back before, but never almost, and then fumbled out of the air and ran back. So, that benefitted us.”

Niles would tack on a 10-yard Paul Hess touchdown run to make it 14-0 after Carolos Habenicht connected on his second extra point kick.

The Wildcats (5-5) scored on the first of two big plays in the opening half when quarterback Caleb Quake connected with Angelo Hausmanis on a 52-yard touchdown pass to cut the Niles lead in half with 3:52 remaining in the first quarter.

Three Rivers would tie the game early in the second quarter as Quake hit Luis Warmack with a 33-yard touchdown pass to make it 14-14.

Niles responded with a Julian Means-Flewellen 32-yard touchdown run to take back the lead, 21-14, this time for good.

The Wildcats would get on the board one last time in the first half with 1:38 remaining as Quake tossed his third touchdown pass and his second to Warmack, which was good for 34 yards. However, Three Rivers missed the extra point kick and had to settle for heading to the locker room trailing 21-20.

The Wildcats would not recover from that mistake.

In the third quarter, Means-Flewellen scored his second touchdown of the night on a 13-yard run and then again on a 59-yard run to make it 35-26 heading into the fourth quarter.

Three Rivers scored on a fourth Quake touchdown pass to Andrew Brown, which covered 19 yards. The Wildcats again failed on the extra point, leaving it down two scores with 12 minutes remaining.

Any thoughts Three Rivers had of a comeback ended quickly in the fourth quarter as Talon Brawley scored on a 1-yard quarterback sneak and on a 3-yard run to complete the scoring. Means-Flewellen scored his fourth touchdown of the night as he picked up a Three Rivers fumble and returned it 17 yards to make it 49-26.

Habenicht was a perfect 8-of-8 on extra-point kicks.

Following the Means-Flewellen score, LaMonta Stone returned the ensuing kickoff 91 yards to complete the scoring for the Wildcats.

Niles outgained Three Rivers 357 to 331 in total offense. The Vikings rushed for 348 of those yards compared to 74 for the Wildcats. Brawley was 1-of-2 passing for five yards, while Quake was 20-of-28 for 257 yards and four touchdowns.

Niles will travel to Edwardsburg for the Division 4 District championship game Friday night. The Vikings will be trying to avenge a 45-7 loss to the Eddies on Sept. 9. Edwardsburg will be seeking its sixth consecutive district title.