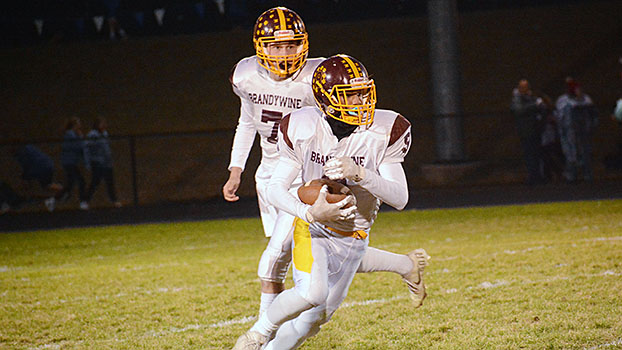 LAWTON – The Brandywine football team got a first-hand look at a championship-caliber team in Lawton Friday night.

The Blue Devils scored 28 unanswered points in the first half and went on to defeat the Bobcats 45-23 in MHSAA Division 7 playoff action.

“We battled,” said Brandywine coach Justin Kinzie. “We had a game plan. One of the things we’ve struggled with all season is coming out flat and we came out ready to play. We got outclassed; that’s a really good football team. They were at Ford Field last year and it shows.”

The game started with a bang with Lawton’s Kal Motter taking the opening kickoff 95 yards for a touchdown to go up 7-0.

The score didn’t faze the Bobcats, who capped their first drive of the game with a Kaeden Warfield 20-yard touchdown run and converted the two-point conversion to take an 8-7 lead.

From there, it was all Lawton.

After scoring a touchdown to take a 14-8 lead, the Blue Devils took advantage of a Warfield fumble they recovered at the Bobcat 16-yard line. One play later, Motter scored to put Lawton up 21-8.

The Blue Devils led 35-8 at halftime.

While the Bobcats trailed by as many as 37 (45-8) points, they never gave up. Brandywine outscored Lawton 15-10 in the second half, with quarterback Hulett finding Palmer for two second half touchdown passes.

“(Lawton) is a great program,” he said. “They’re coached well, they’re great kids. I’d love to see Lawton go back to state and I hope that us playing them tough helped make them better. I’m looking forward to seeing them again next year.”

With the loss, Brandywine finishes the season with a 4-6 record. While the desired outcome of Friday’s game was not reached, Kinzie was proud of the way his team handled adversity throughout the season.

“Years from now, people aren’t gonna remember what the score was,” Kinzie told his team following the game. “What they’re gonna remember is that we showed up on a bus with 20 guys and we went down swinging to the last second. If there are football gods up there, I hope that the football gods are smiling down on Brandywine tonight. Because we played football the way it’s supposed to be played – with class and dignity, we represented our community all season long.”