Roadrunners fall to Lake Michigan, but qualify for tournament 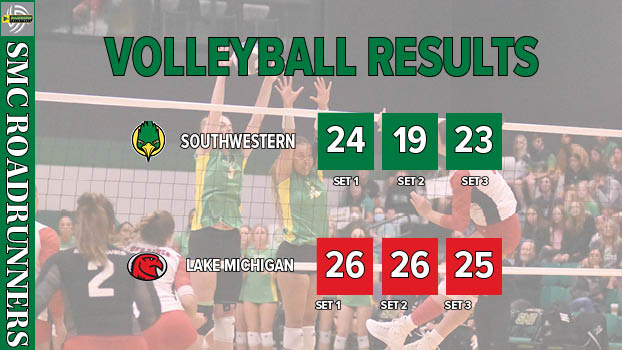 BENTON HARBOR — It has been a roller-coaster season for the Southwestern Michigan College volleyball team in its return to the court after a 26-year absence from the sport.

Southwestern was trying to hold on to fourth place in the Western Conference to earn a spot in the Great Lakes District B Tournament. A win or a Glen Oaks Community College loss would advance the Roadrunners to the play-in match against Schoolcraft Community College on a date and location yet to be determined.

The Red Hawks showed why they are the Western Conference champion as they defeated the Roadrunners 26-24, 25-19 and 25-23 in a match that went back and forth all night.

Fortunately for Southwestern, Ancilla College knocked off Glen Oaks in five sets, which advanced the Roadrunners into the postseason.

“We have been building the SMC volleyball team and program all season,” said SMC Coach Jenny Nate. “We have had some incredible wins and some tough losses [which we learned from], but we have held tough to clinch the fourth seed in the conference, which gets us to the tournament.”

Nate is incredibly proud of what her squad has accomplished in such a short period of time.

“Five months ago, we didn’t have a gym, a team, or a spring season, and we are entirely made up of freshmen,” she said. “SMC volleyball hasn’t existed for 26 years. These amazing young ladies believed in the vision of SMC volleyball, in each other, in our coaching staff, and in what we can be. Today, despite a close loss to the No. 1 team in the conference, we had an ultimate win by earning a trip to the tournament. This team has showed up day in and day out with 100 percent effort, and that effort is paying off.”

The Roadrunners finish the regular season with a 12-18 overall record. SMC finished with a 5-7 record in the Western Conference, and a fourth-place finished after being picked to finish next to last in the preseason poll.

Lake Michigan College, which will play for the MCCAA championship this weekend, is now 27-10 overall and finished Western Conference play 10-2.