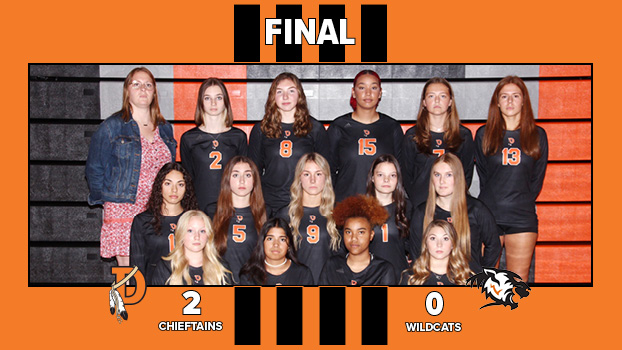 DOWAGIAC — The Dowagiac Chieftains wrapped up the home portion of its regular season with 2-0 wins against River Valley and Marcellus in the annual Pink Out Quad Wednesday night.

Caleigh Wimberley led the Chieftains with 10 digs and nine kills, while she also had three aces. Abbey Dobberstein finished the match with seven kills, two aces and 10 digs. Maggie Weller added six kills, four digs and a block, while Alanah Smith finished with five kills. Brooklyn Smith had 23 assists, a kill, an ace and four digs.

“When the evening started the girls started out playing at a low level,” said Dowagiac Coach Amber Todd. “As the games picked up the girls began to bring more energy. I had the opportunity to put in players who do not see the court very often and it was great to see them be successful on the court.”

The Eddies will take a 27-7-5 record into the postseason, while the Bobcats will enter the state tournament with a 22-11-3 overall record.

The Edwardsburg front line of Drew Glaser, Sarah Pippin, Nisa Shier and Liz Pederson were dominant once again as the foursome combined for 31 kills and five blocks. Ava Meek led the team with 14 digs, while Lexi Schimpa finished the night with 20 assists, five digs and three kills.