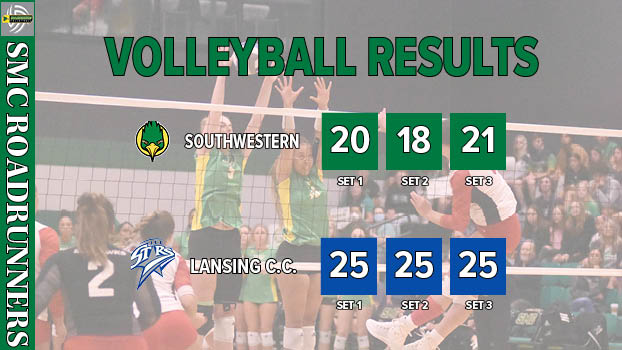 Despite a strong effort, the Roadrunners were swept by the Stars, which kept SMC in fourth place in the Western Conference standings behind leader Lake Michigan College, Kalamazoo Valley Community College and Lansing.

The Roadrunners travel to Benton Harbor Thursday night to take on Lake Michigan College in the regular-season finale.

Lansing held on to the third and final automatic qualifying spot with a 25-20, 25-18 and 25-21 win over Southwestern Michigan.

“Tonight was a loss, but it was a step in the right direction,” said SMC Coach Jenny Nate. “We have worked hard the entire season to play as tough on the road as we do on our home court. And even though we didn’t win the match we stayed mentally tough, composed, and fought for every single point. Our players hustled, communicated, and picked each other up on and off the court. The culture that we are working hard to create at SMC really showed tonight. I told them to keep their heads up and be proud of the fight we took to Lansing, and we will regroup and use that same determination and focus when we face LMC on Thursday.”