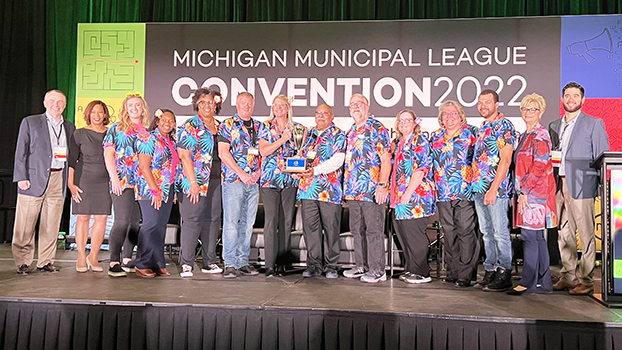 MUSKEGON — The Village of Cassopolis was voted the winner of the 2022 Community Excellence Award — the most prestigious Michigan Municipal League community honor.

The village is a small, rural community located in southwest Michigan in Cass County. Preliminary voting to determine this year’s four finalists (Cassopolis, Royal Oak, Farmington Hills, and Traverse City) was done by a small voting board. The top four projects competed at the League’s Convention, where they presented their projects on the main stage and marketed their projects at designated CEA finalist booths. This year’s convention took place in Muskegon, Oct. 19-21, and Convention attendees voted for their favorite project.

The Village of Cassopolis received the most votes and was awarded the official Community Excellence Award during the closing general session.

“On behalf of the entire League, I want to congratulate the Village of Cassopolis on receiving this year’s Community Excellence Award,” said Barb Ziarko, the president of the League’s Board of Trustees and Sterling Heights Councilmember. “They truly transformed their community with a variety of impressive projects that created a vibrant, sustainable, and exceptional community to be proud of. I would also like to thank everyone who submitted their projects this year. These projects are so important for Michigan’s communities. We are so proud of what everyone across our state has accomplished.”

Since 2007, the CEA has been the League’s most prestigious community award. It’s also affectionately called “The Race for the Cup” because the winning community gets a large trophy and bragging rights for the year. The 2021 winner was Reimaging, Reinventing, and Renewing Auburn Road which was submitted by Rochester Hills. View all past winners here. The CEAs are sponsored by the Plante Moran accounting firm.

“We would like to thank MML, Plante Moran of course, and we would like to thank everyone who realizes that just because you are small and rural you can still be exceptional,” said Emilie LaGrow, the village manager of the Village of Cassopolis. “We would like to thank our residents and our council for believing that we can do it. Our staff is phenomenal. It is a beautiful thing to see all of the hard work come to fruition and the community really embrace what happened and the changes, and truly love where they live. It’s the best reward ever. This [the cup] is pretty great too.”

This year’s competition had 14 total entries, and all were award worthy. The League would like to thank and recognize all the projects that were entered this year: Birmingham, Caro, Cassopolis, Farmington Hills, Ferndale, Grand Rapids, Ironwood, Meridian Township, Pentwater, Royal Oak, Southfield, Tawas City, Traverse City, and Vassar.