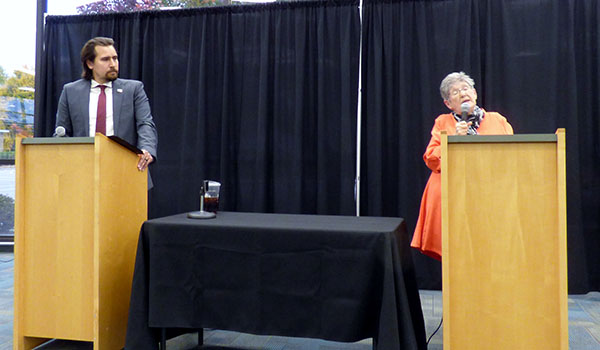 The two candidates had differing views on what the role of government should be and sparred on a number of issues, from elections and education to guns and abortion. They did agree on wanting to encourage more young people to get involved in politics and civic life.

The issue of abortion including State Proposal 3 drew the most extensive back and forth between the candidates. Ludman said she supports reproductive freedom for women and supports the proposal. Paquette said that while he’s all in favor of women’s freedom, the life of the baby needs to be protected as well.

Paquette said he believes the proposal is too broad and allows abortion at any time during a pregnancy. Ludman disagreed, claiming that the proposal still allows limits to be placed on abortion. She noted that it is an example of governmental interference, while he said that there are times when the government needs to weigh in to protect life.

On election integrity, Ludman said she favored proposal 2 which she said would expand early voting and allow local clerks to accept money from outside organizations. She added that making voting easier doesn’t mean security will be compromised.

Paquette said he doesn’t think there are barriers to voting currently and wants to see more emphasis placed on voter picture IDs. He said he was concerned about what he sees as the “nebulous” practice of allowing voters to sign affidavits and also doesn’t want to see a repeat of 2020 when unsolicited ballots were sent out.

On gun control, Paquette said he’s a strong Second Amendment supporter and noted that it’s not the gun that commits the crime. Ludman said she would like to see gun control measures passed and gun owners required to take a safety course. Paquette countered that gun ownership is a right and not a privilege such as driving and having to get a license.

The two agreed that gay rights should be respected but disagreed on what Paquette sees as the politicization of the issue and conflating it with transgender issues. Ludman said she wants to see students be able to talk to teachers about gender identity without notifying parents while Paquette said parents need to be kept in the loop.

Ludman said the three most important issues for her are supporting public education and not diverting public money into private education, banning the criminalization of abortion and working to protect the vote. She would like to see teachers be paid more and stem the flow of people leaving the profession.

Paquette said the three top issues for him are energy, education and the income tax. He favors the promotion of nuclear energy which he said is the future as the country transitions from fossil fuels. He supports promoting innovative education efforts and merit pay as well as reducing the income tax rate which was promised in 2018 but not done.

The two candidates said they will stay involved in public affairs whether or not they win election to the house. Ludman said she will continue to volunteer at a food pantry, help organizations with grant writing and working to engage young people. Paquette said he would go back to teaching which he called much more fulfilling than politics.

Paquette said in his closing statement that serving in the legislature has been the highest honor of his life and he has enjoyed meeting constituents and engaging in a debate on the issues. Ludman said she wants to change people’s view of politics, saying that it isn’t a dirty word but is about using the government to get things done.