Playoff-bound teams are peaking at the right time 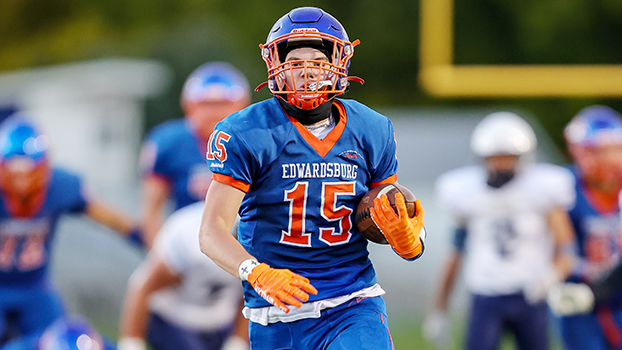 Brett Allen and Edwardsburg will host Paw Paw in the opening round of the Division 4 playoffs Friday night. (Leader file photo)

NILES — The key to a successful playoff run is peaking at the right time.

Edwardsburg, Niles and Buchanan will take winning streaks into the postseason, while Brandywine will try to get back on the winning track Friday night.

The Eddies head into the Division 4 football playoffs on an eight-game winning streak. Edwardsburg lost to Grand Rapids West Catholic in the season opener, but has not lost a game since.

Buchanan has won seven consecutive games since falling to rival Niles in Week 2. The Vikings are on a four-game winning streak. The last time Niles lost, it was at the hands of Wolverine Conference foe Vicksburg.

The Bobcats have dropped four straight after opening the season 4-1. Brandywine also had perhaps the most formidable opening-round opponent of the four schools as it heads East to face defending Division 7 state runner-up Lawton.

The Eddies (8-1) enter the playoffs, having won their 10th consecutive Wolverine Conference championship. Edwardsburg will face Paw Paw (5-4) at Leo Hoffman Field at 7 p.m. Friday. The Eddies defeated the Red Wolves 58-36 in their league contest.

After falling to West Catholic 28-20 in Week 1, Edwardsburg rebounded to win the remaining games on its schedule, including a 40-7 win over defending Division 4 state champion Chelsea Oct. 14.

The Eddies have played more close games this season, but they appeared to hit their stride against the Red Wolves with the 58 points they scored on Sept. 30. Edwardsburg outscored its opponents 212 to 54 over the final four games of the regular season.

Veteran Edwardsburg Coach Kevin Bartz attributes that to having players getting healthy.

“Brett Allen had just come back and only played offense for us,” Bartz said of the offensive hitting its stride. “Mikey Pryor, who is our second-fastest running back it back. We had been going with two smaller, tougher backs, but they were not breakaway runners. So, we were having trouble scoring points. Brett Allen came back for that game and then we got Mikey Pryor back and they are by far our two fastest backs. All of a sudden, those 6-yard runs started becoming 60-yard runs we started putting up points a lot faster.

Allen scored four touchdowns in the game against the Red Wolves and ran for 226 yards on just five carries for an average of 45.5 years. He has followed that up with games of 83 yards, 103 yards and 138 yards.

Paw Paw enters Friday night’s contest, losing four of its final five games, including a 29-23 decision to Plainwell in the regular-season finale.

A season ago, the Niles football team was heartbroken after missing out on the playoffs by the smallest of margins. Sunday night, the Vikings celebrated as they earned their first playoff big since 2003.

Niles and every team that did not opt out qualified for the postseason in 2020 due to the season being shortened by COVID-19.

Second-year Niles Coach Scot Shaw has his team rolling after a 1-4 start. The Vikings are arguably one of the hottest teams heading into the playoffs.

The Vikings will get a chance to avenge one of those losses as they travel to Three Rivers for their opening round game, which is scheduled to begin at 7 p.m.

“I am excited to be back in, and I am pretty excited about our draw,” Shaw said. “I think all of the other three teams wanted to stay away from Edwardsburg first. The road out of here obviously goes through Edwardsburg.”

While there is not a player on the 2022 Niles roster who was born the last time the Vikings qualified for the postseason, Shaw is no stranger to the playoffs or his first-round opponent.

Shaw coached the Wildcats for 20 years and led Three Rivers to the 2003 Division 4 state championship.

The veteran coach credits the improvement of his squad as the season has gone along because his young players — Niles starts multiple freshmen and sophomores — grow up and learn how to play varsity football.

“We are playing well,” he said. “I am pleased with where we are at and that we didn’t fold in the middle of the season at 1-4. We could have pretty easily. We were playing okay up to that point with the exception of the Sturgis game. We even did some good things against Edwardsburg. But we kept shooting ourselves in the foot, turning the ball over and making silly mistakes. We have kind of all that stuff up. It is amazing how many points you can score when you keep ahold of the football.”

The Buchanan Bucks have qualified for the state playoffs for the second time in three years.

Buchanan reached the postseason in 2020 and reached the Division 6 District championship game before losing to Constantine, which will be their opening opponent Friday night.

After going just 3-6 last season, the Bucks turned things around under Coach Mark Frey and went 8-1 and won the inaugural Lakeland Conference championship. Buchanan’s lone loss was a 28-18 decision to playoff-bound Niles in Week 2.

Frey and his squad are no strangers to the Falcons as they scrimmage Constantine before the start of this season.

“Fortunately, we scrimmaged them and both teams faired pretty well that day,” he said. “We got to see and get a feel for what they do already. Hopefully, we can stay mentally sound and stay true to our jobs, kind of how we did last week.”

Last week the Bucks faced Centreville in their regular-season finale. Buchanan got off to a quick start and then had to hold on as the game came down to the final play. The Bucks won 36-28 to equal it 2020 record.

It has been an up-and-down season for the Bobcats, who will travel to Lawton Friday night to face the Blue Devils, who are trying to return to Ford Field in Detroit, where they dropped a 14-10 decision to Pewamo-Westphalia in the Division 7 title game.

After a loss in the opener to playoff-bound Watervliet, the Bobcats rolled off four straight victories, including Brandywine’s first against Dowagiac since 1976.

Unfortunately, it turned from that point on, and the Bobcats lost their last four contests, including a 28-14 loss to Parchment last Friday night.

“One nice thing about Michigan versus Indiana is that you have to earn your way into the playoffs,” said Brandywine Head Coach Kinzie. “At least we know it is not like having the 64th-best team in the state versus the best team in the state. We at least know that we’re close enough to have a puncher’s chance while we are out there.”

Kickoff for Friday’s game is set for 7 p.m.