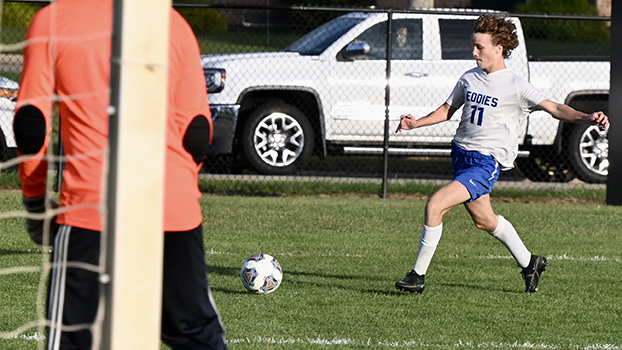 ST. JOSEPH — A pair of first-half goals put visiting Edwardsburg in a hole it could not climb out of in the Division 2 District championship match at St. Joseph High School Saturday morning.

The host Bears scored twice in each half to defeat the Eddies 4-1 to win its second straight district soccer championship. St. Joseph also defeated Edwardsburg 4-1 earlier in the season.

Edwardsburg (16-4) scored first in the second half to cut the Bears’ advantage to 2-1 when Grayson Hebert scored off a corner kick by Devyn Aria.

St. Joseph (18-2-2) was able to restore its two-goal lead when Christian Shannon, who left the match earlier with an ankle injury, returned to score as the Bears took a 3-1 lead. Henrique Czesnat ended any thoughts of a Edwardsburg rally when he scored to make it 4-1.

St. Joseph outshot Edwardsburg 8-3 in the match. Caiden Leer had four saves for the Eddies.