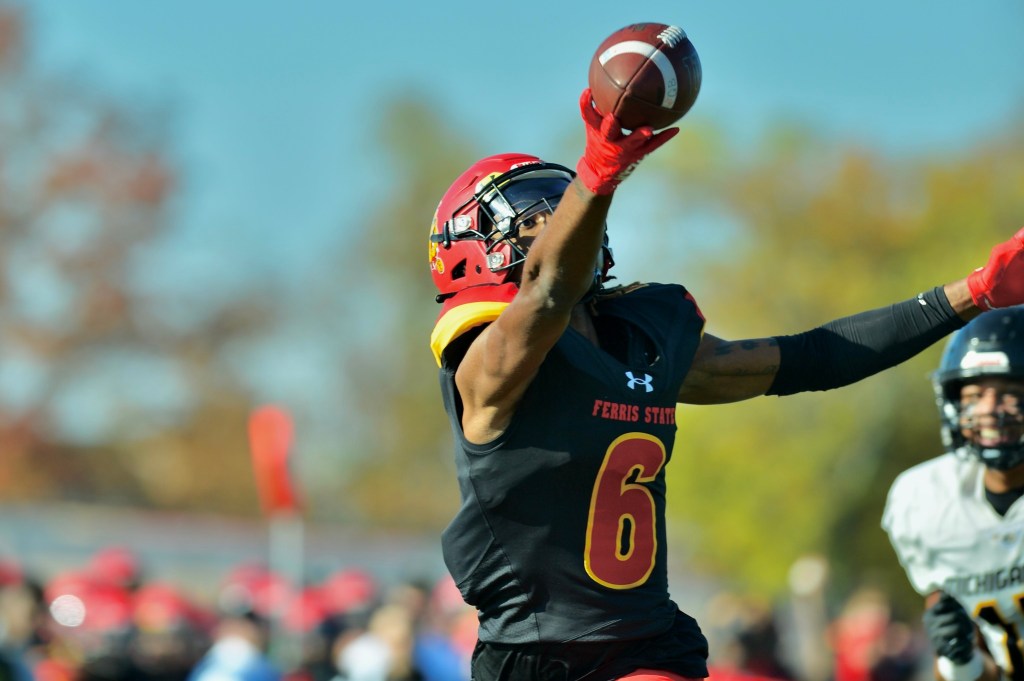 On a beautiful fall day in West Michigan, the visiting Huskies bolted out to a 10-0 first-quarter lead before the Bulldogs tallied three second-half touchdowns en route to the win, moving to 6-1 overall and 2-1 in Great Lakes Intercollegiate Athletic Conference play.

Michigan Tech, which was making its first visit to Top Taggart Field since 2015, drove 80 yards in four plays on its opening possession to find the end zone first on Will Ark’s five-yard scoring throw to Darius Willis.

Later in the opening stanza, the Huskies put together a lengthy 14-play, 74-yard drive that last more than seven minutes before settling for a 23-yard field goal from Drew Wyble.

The Bulldogs finally got on the board and cut the margin to 10-7 midway thru the second period when redshirt freshman quarterback Carson Gulker scored his first of three TD’s on the afternoon with a three-yard carry, finishing a 55-yard drive that last less than two minutes on five plays. The score stood to halftime.

In the second half, Gulker handled the quarterback duties for FSU and led a 12-play, 52-yard jaunt that finished with his own one-yard scoring plunge, giving the Bulldogs a 14-10 lead with 8:48 left in the third.

The lead grew to 21-10 early in the fourth quarter as Gulker found the end zone again with a seven-yard scoring run four minutes into the final frame to cap an 80-yard march in 11 plays.

The Bulldogs got the ball back after a defensive stop, but MTU’s Hunter Buechel cut the margin to 21-17 with a 25-yard pick six interception return.

However, the momentum didn’t last long for the Huskies as Gulker hooked up with sophomore wideout Tyrese Hunt-Thompson (Cassopolis) on the next FSU offensive play for a 75-yard touchdown in the air, making it 28-17.

Michigan Tech did pull back within 28-20 as Ark engineered a 72-yard drive that finished with Wyble’s 20-yard field goal, but could get no closer as the Bulldogs were able to salt the game away.

The Bulldogs finished with 405 yards of total offense and limited the Huskies to 271 yards, including -26 yards rushing. FSU had 242 in the air and another 163 yards on the ground in the win.

Gulker ran for a game-high 103 yards rushing on 23 carries and completed seven-of-13 passes for 174 yards and a score. FSU’s Evan Cummins got the start and threw for 68 yards on eifght-of-12 passing. Hunt-Thompson paced the Bulldogs in the receiving game with four catches for 130 yards while CJ Jefferson hauled in four passes for 39 yards and Marcus Taylor had four grabs for 29 yards.

Ark led the Huskies by completing 26-of-50 throws for 297 yards. Brandon Michalak had eight catches for 155 yards while Willis caught seven balls for 48 yards.

Defensively, Jovan Bayless had six tackles, including 1.5 tackles for loss, to lead FSU. Senior Sidney McCloud intercepted a pass for FSU and the Bulldogs tallied eight tackles for loss in the contest as a team.

Dowagiac’s Caleb Murphy picked up his 14th sack of the season.

The win was FSU’s 10th-straight over the Huskies in the series.

Prior to the game, the Bulldogs celebrated alum and two-time Harlon Hill Trophy winner Jason Vander Laan, who became the first player in the program’s 113-year history to have his jersey and number officially retired in a special pregame ceremony. FSU also dedicated the victory bell in honor of former head coach Bob Leach during the day’s events and it was Football Alumni Day along with Friends and Family Weekend on the FSU campus, all of which helped draw in nearly 5,000 fans for the contest.

The Bulldogs will hit the road next week as they travel to the Upper Peninsula to face Northern Michigan inside the Superior Dome starting at 1 p.m.