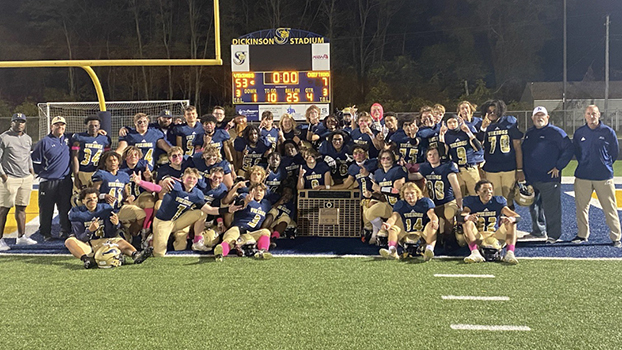 Niles will own the Black and Blue plaque for the next three years after its 53-7 win over Dowagiac Friday night. The two teams do not play again until 2025. (Leader photo/MAXWELL HARDEN)

ST. JOSEPH — The Niles football team made sure the Black and Blue plaque will remain in the Vikings’ trophy case one more year.

Niles scored the first 47 points of the game and went on to defeat Dowagiac 53-7 in the 105th Black and Blue Game Friday night at St. Joseph High School.

Niles’ home games have been played at local high school football fields this season due to the ongoing turf installation on its own field. The Vikings hold a 51-49-5 all-time advantage against the Chieftains and have won back-to-back matchups in the rivalry for the first time since 2001-2002.

“We played well,” said Niles coach Scot Shaw. “We got off to a good start and kept it rolling. Tonight was our night.

The Vikings also get to keep the Black and Blue plaque for at least three years as they will not play the Chieftains again until 2025.

While stats were not available at the conclusion of the game, the Vikings rushed for more than 200 yards on scoring plays alone. Junior Julian Means-Flewellen scored on plays of 44 and 10 yards and sophomore Paul Hess tallied two touchdowns of his own. Corrion Parks and Dylan Garris also found the end zone for the Vikings, who led 26-0 after one quarter of play and 47-0 at halftime.

Justin Bannow tallied Dowagiac’s lone touchdown with a fourth quarter run. Starting quarterback Isiah Hill left the game in the first half with an injury and did not return.

According to Dowagiac coach Duane Davis, the Chieftains sat seven starters in the first quarter for missing practice time this week.

“I told them coming out of halftime to give me what you got and find some fight,” Davis said. “We found some fight, we found some good stuff. We’re still young but we grew. I just wish it was a little bit better.”

Dowagiac finished the season with a 2-7 record, a two-win improvement after going winless in 2021. The Chieftains improved on both offense and defense, scoring 139 more points and giving up 93 less this year compared to last year. Still, Davis hopes to restore the program to its former glory.

“Overall, we had moments but we stepped on our own toes most of the year,” Davis said. “Penalties, turnovers, we kind of shot ourselves in the foot, so we gotta fix that in the offseason and get more controlled and more focused. Once we do that, we’ll be alright. Having 18 seniors next year is gonna help. It’s gonna help a lot.”

With the win in tow, Niles has earned consecutive winning seasons for the first time since 2002-2003 and will make its first postseason appearance since 2003 (excluding 2020 when every Michigan team participated in the playoffs).

The Vikings will take a four-game winning streak into the playoffs as they await the announcement of their opponent on Selection Sunday at 6 p.m. Sunday on Bally Sports Detroit.