Buchanan holds on to beat Centreville 36-28 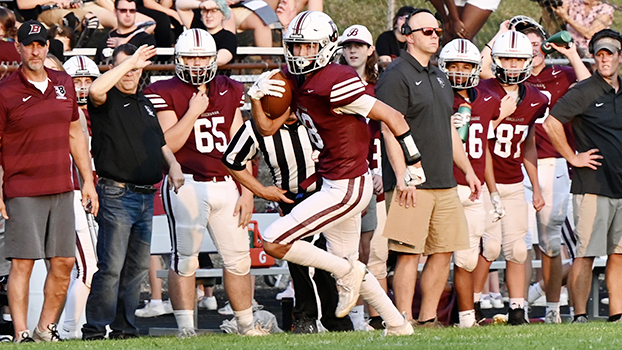 BUCHANAN — It took all 48 minutes for the Buchanan football team to secure its eighth victory of the season Friday night.

Centreville took the Bucks down to the final play of the game before falling 36-28 in the regular season finale for both squads at Memorial Field.

The win, which was Buchanan’s sixth straight, had the usual theme. The Bucks (8-1) build a comfortable first-half lead and then hang on for dear life as the opponent comes storming back in the final 24 minutes of the contest.

This week, Buchanan led 28-14 at halftime, before the Bulldogs cut the lead to 28-20 by the end of the third quarter.

A Nico Finn touchdown in the fourth quarter proved to be the difference in the non-conference contest. Finn, who scored the game’s opening touchdown on a 1-yard run, ended the Bucks’ scoring with a 4-yard run. Connor Legault then hooked up with Finn on the 2-point conversion pass to give Buchanan a 36-20 advantage.

Centreville (6-3) would make one last run at the Bucks, scoring late in the game, and then driving toward another touchdown when the Buchanan defense rose up and thwarted the threat as time expired.

The Bulldogs actually outgained the Bucks 298-253 in total offense.

Buchanan ran for 182 yards led by Leland Payne’s 79 yards on 17 carries. Jack Ruth, who scored a pair of touchdowns, added 53 yards on two totes. Finn finished with 32 yards on 16 carries and the two scores.

Legault finished the game 6-of-13 for 71 yards and an 16-yard touchdown pass to Thomas VanOverberghe, who finished the night with five receptions for 52 yards.

Ruth led the Buchanan defense with seven tackles, while AJ Mcleod had sixth. Finn and Dillon Oatsvall both had 5.5 tackles for the Bucks.