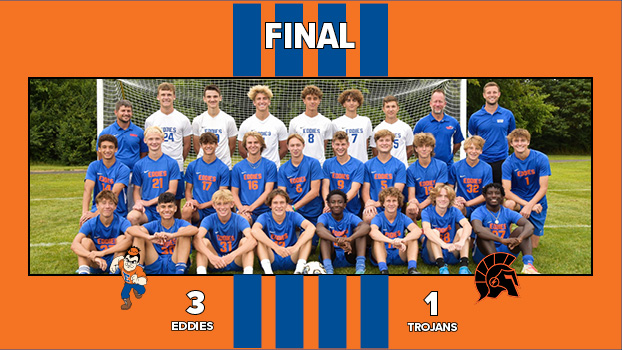 ST. JOSEPH — The Edwardsburg soccer team did not let a weather delay keep it from advancing to the Division 2 District championship game at St. Joseph High School Saturday.

Snow temperatures around the freezing mark on Tuesday forced the match to be moved to Wednesday.

Scoring for the Eddies were Dion Sokhadze, Alex Carfi and Daniel Carfi. Kaleb Brown assisted on the Alex Carfi goal.

The win improved the Eddies to 16-3 on the season. It was the second win over the Trojans this season. Edwardsburg defeated Sturgis 2-1 in their conference match Oct. 5.

Christian Shannon scored the lone goal for the Bears, who improved to 17-2-2 on the season.

It was the second meeting between the Bears and Bulldogs, with St. Joseph winning 2-1 in its regular-season finale.

Saturday’s championship match will be the second meeting between Edwardsburg and St. Joseph this season. The Bears won the first match 4-1 on Aug. 27.