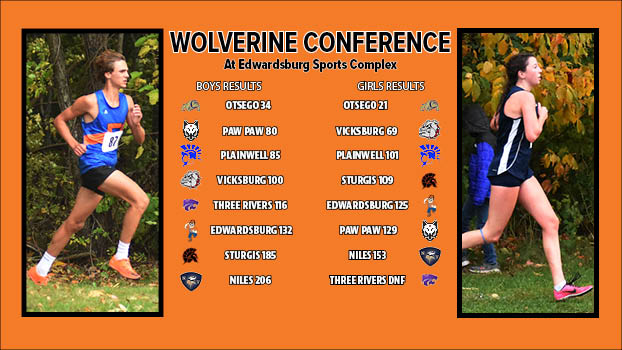 With temperatures hovering around 40 degrees and a steady win that whipped the rain around and lowered the wind chill temperature below freezing, the Bulldogs won the boy’s conference title with 34 points over Paw Paw, which finished with 80 points. The host Eddies placed sixth with 132 points and Niles eighth with 206 points.

Otsego’s Pierce Brentley was the individual winner as he posted a time of 16:38.

Dane Bailey finished ninth for Edwardsburg with a time of 17:29. Aiden Krueger led Niles with a fifth-place finish and a time of 17:07.

The Bulldogs won the girl’s championship with 21 points. Vicksburg was second with 69. Edwardsburg placed fifth with 125 points and Niles seventh with 153 points.

Megan Germain, of Otsego, was the individual champion with her time of 18:53.