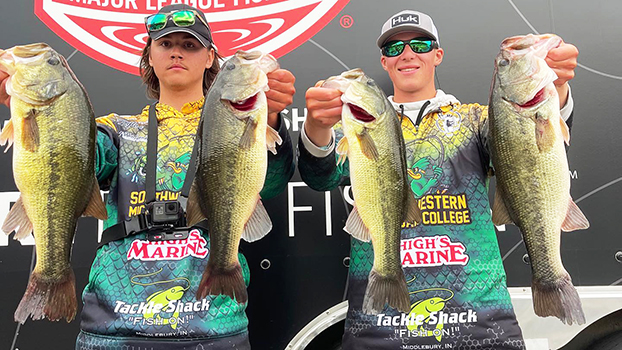 SMC’s David Klimczak and Dylan Lewis finished third in Missouri this past weekend and earned a spot in the national championships in February. (Submitted photo)

DOWAGIAC — Two Southwestern Michigan College Bass Anglers are heading to the national championships after their performance this past weekend in Missouri.

David Klimczak and Dylan Lewis punched their tickets to the national tournament on Lake Toho in Florida this February.

The duo caught four fish, weighing in at 16.10 pounds at the Major League Fishing Central Open on Lake of the Ozarks in Osage Beach, Missouri.

The winning team, with five fish totaling 17.2 pounds, were caught by a team from Tarleton State. Missouri State University finished third with a total of 17 pounds.

“It was fishing very tough for many of the angler competing today, but @levinfishing and @dk.bassin managed to find four of the right ones weighing an incredible 16 pounds and 10 ounces,” SMC Coach Bill Mathews said. “Their finish allowed them to punch their ticket to the national championship this upcoming February.”

“Our other two boats managed to bring a few fish to the scales as well and all of our anglers finishes should help us jump up in the School of the Year race,” Mathews said.