Bobcats wrap up season with strong perform at Division 4 finals 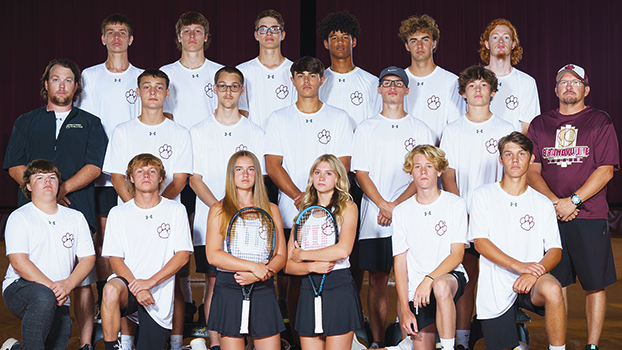 The Brandywine tennis team wrap up one of its best seasons with a solid performance at the Division 4 state finals. (Leader file photo)

The Bobcats were the lone public Class C school competing in the finals, which were held at Kalamazoo College and Western Michigan University. Brandywine finished tied for 13th with five points.

Grosse Pointe Woods University of Liggett won the Division 4 state title with 30 points. Hudsonville Unity Christian led after the first day of competition on Friday, but could not hold off Liggett on Saturday. Unity Christian finished with 27 points.

Brandywine reached the third round in two flights.

Brody Prenkert advanced to the third round in No. 4 singles as he received a first-round bye before defeating Noah Lucas of Saginaw Nouvel 4-6, 7-6(5) and 6-4. Prenkert was eliminated by Kalamazoo Hackett’s Andrew Alcaraz 6-2 and 6-3.

Blake Magyar and Ryder Richard also advanced to the third round in No. 4 doubles after receiving a first-round bye and following that up with a three-set victory over St. Francis’ Quinten Musgrave and Will Sutton, 6-4, 6-7(4) and 6-3. Magyar and Richard were eliminated by Hackett’s David Verduzco and Grahm Zygadio 6-0 and 6-0.

“We played great overall and our No. 4 doubles team Blake and Ryder had a tremendous year and day,” Saidenbender said. At No. 4 singles, Brody Prenkert ended his career on a high note. Our No. 2 doubles team of Jaydon Spitler and Matt Veach showed tremendous improvement throughout the year and it showed with their performance.”

Spitler and Veach defeated Kyra Lamb and Ben Selby, of Maple City Glen Lake, 1-6, 6-2 and 6-2 in their opening round match. They were eliminated by Andrew Miller and Dominic Hop, of Unity Christian, 6-0 and 6-1.

“No one played bad, I was proud of them all,” Sidenbender said. It’s tough when you are the only class C public school there. It’s a uphill battle, but they never complained and just competed. this was one our most successful seasons.”