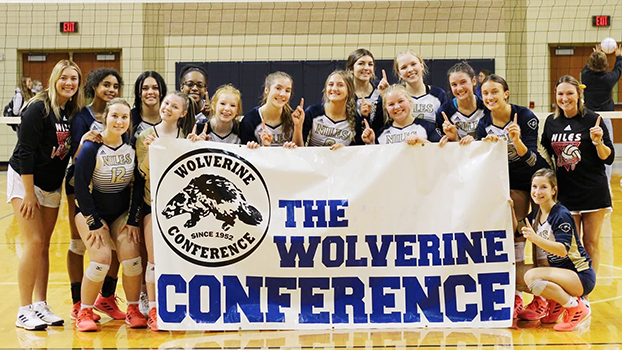 DOWAGIAC — Visiting Buchanan and Niles locked up a share of their respective conference championships Thursday night.

At Otsego, Niles completed its Wolverine Conference campaign with a 6-1 record with a sweep of the Bulldogs, 25-18, 25-21 and 25-23. The Vikings earn a share of the league title with the victory.

Edwardsburg, which is currently 5-1, can grab a share of the conference crown with a win over Sturgis Thursday night.

“We had a great game,” said Buchanan Coach Shelly Bossart. “I thought we played well tonight on the road. This team is such a fun team to watch. Everyone contributed tonight and I’m proud of them for being 4-0 in the conference.”

“Last night the girls fought hard, but Buchanan came out strong with a fast offense and hitter who could put the ball away,” said Dowagiac Coach Amber Todd. “Our girls struggled to put the ball away and get things going. We have a lot of things to work on and this team has so much potential to do great things.”

The Niles varsity volleyball has come a long way since losing a Wolverine Conference match to Edwardsburg back in September.

First-year Niles Coach Samantha Zimmerman said her team has continued to improve as the season has went along.

“Tonight was an amazing night,” she said. “First, we got to celebrate Amelia Florkowski in set two for her 1,000th career dig [in her junior year]. Then we played some of our best ball to clinch first place in the Wolverine Conference. It was a total team effort and I am so proud of the team’s chemistry and focus tonight. Even when we started the third set down by six points, they worked together on coming back one ball at a time to finish the match.

“We thought our conference play started rough when we lost to Edwardsburg in the second conference match of the season, but these girls trusted the process and finished the season strong going 6-1 in the conference. Now we go into next week with a fun crosstown rival with Brandywine at home to celebrate senior night next Wednesday.”