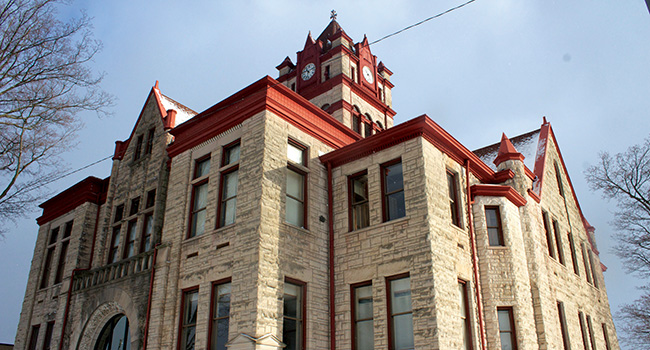 The Cass County Board of Commissioners will meet at a work-study session June 13 to discuss the fate of the old courthouse. (Leader file photo)

CASSOPOLIS — The Cass County Historic Courthouse renovation has advanced to its final stage.

The Cass County Board of Commissioners voted Friday, Oct. 7 in favor of moving forward with the third and final phase of construction with Intersect Studio and voted 6-1 to allocate funds to phase 3.

Intersect Studio was on hand to give those in attendance an overview of what phase 3 construction will entail, which included detailed floor plans of each floor of the building.

Construction is expected to begin within the next one to three months with an anticipated completion of late fall 2023 or early 2024.

“With the time, energy, and resources that have gone into the planning and execution of the project thus far as well as the massive benefits we anticipate the project to provide to both county operations and the community, we feel that proceeding with the obligation of funding will have a tremendous impact on the future of the County and will provide for an incredible shift in operational efficiencies for years to come,” said County Administrator Matthew Newton in a memo to the board.

Several members of the public were excited to see the project move forward, including Underground Railroad Society of Cass County Treasurer Cathy LaPointe.

“This is very emotional to me” she said. “A lot of people have worked on this for decades but you people on this board and administration brought it home. Congratulations.”

The Historic Courthouse design services have been centered around a three-phase approach. The first phase, Programming, began on April 1, 2021 and concluded on December 16th, 2021. During Phase 1, initial fit testing and preliminary studies and designs were completed and presented to the Board of Commissioners. On Feb. 3, Phase 2 design and development Services began. This phase focused very heavily on refining the overall design, branding, furniture, MEP engineering, structural engineering, and survey and civil engineering to determine an updated, detailed project budget and identification of the final deliverables required for construction documents.

Phase 3 Construction Document and Administration Services represents the final step in this process. The results of Phase 3 will be final construction prints, diagrams, and floorplans to be used for construction, identification of finish materials, interior and exterior features, site plan layout, mechanical, electrical, plumbing and construction engineering, coordination on technology implementation, final branding design, plan review, and support for the County and construction teams.

The project, as presented, would require the use of all remaining ARPA funding as well as $1.5 million from the Public Improvement Fund over Fiscal year ‘23 and ‘24 with no use of fund balance contemplated. The county emphasized that the total project budget presented – $9,626,276 – represents the maximum costs anticipated. The county expects to realize cost-savings on the overall project and any cost-savings that are realized would be retained in the Public Improvement Fund for the purpose of providing one source of funding for the Jail and Sheriff Office Improvement Projects previously discussed.

During the public comment portion of the meeting, Sheriff Richard Behnke expressed his disappointment with the board’s decision to redesignate the $1.8 million originally intended for the Sheriff’s Office and jail improvements to the courthouse project.

Behnke said the Cass County jail system is 22 years old and needs to be updated. The jail has had its windows replaced and is in the process of replacing showers but further progress has been put on hold. While he said he has been told that the projects are on hold, Behnke said that without funding or the ability to fund that he perceives the projects as having been canceled.

“I’m disappointed that these projects have been put on the back burner,” he said. “These projects started (in the spring) – I’m just talking about the sheriff’s office jail and the administrative renovations – but no action has been taken by Intersect since then. I have enquired, but they’ve never come back to me with any updates or anything.”

Behnke said he believes he had been intentionally kept out of the loop regarding the reallocation of funds.

“I feel like it is intentional because they knew that this money wasn’t here,” he said. “I don’t have the facts for that, that’s just my personal opinion, but the fact is that I have not been kept in the loop or not responded through. That’s not acceptable.”

Commissioner Robert Benjamin was the lone dissenting voter for the reallocation of funds to the courthouse project, citing the stalled jail projects as the reason why.

“My understanding was that stuff was moving forward until I heard otherwise today and so I’d like to get an update on that project at probably our next meeting to see where we’re going with that,” he said.

Newton said the Capital Projects Committee recognizes the importance of the aforementioned projects.

“The decision to redesignate funds does not preclude those projects from continuing when final designs and plans are prepared and ready,” Newton said. If excess revenue is realized through the possible sale of the annex or through increases in other areas of the budget, the plan would be to utilize those excess proceeds to increase funding to the Public Improvement Fund to be utilized on the Jail and Sheriff Office Projects.”

Newton added that, if necessary, the Capital Projects Committee noted that financing options could be explored to facilitate those projects as well.

“The key matter here is the most effective use of existing ARPA funds,” he said. “Since the Courthouse Project is ready to proceed at this time, while the other projects are in the early programming phases, it is logical to leverage the ARPA funding towards the Courthouse to ensure further cost escalations are avoided. Additionally, the importance of the other projects is fully understood and future year budgets and planning will be utilized to ensure that those projects are able to proceed.”