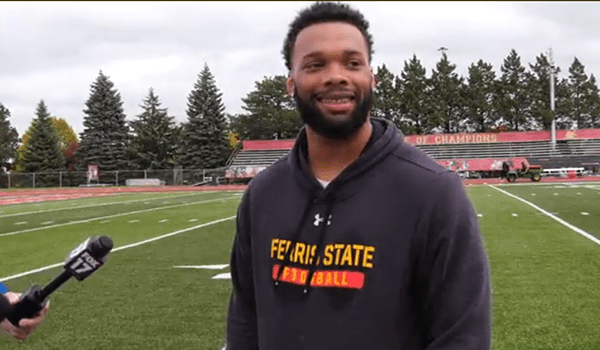 BIG RAPIDS — In a matchup against the top two football teams in Division II, a local product will play a major role in the game’s outcome.

Dowagiac native Caleb Murphy and the No. 1-ranked Ferris State football team are gearing up to host No. 2-ranked Grand Valley State at 2 p.m. Saturday in the annual Anchor-Bone Classic.

Both teams are 6-0 with the Bulldogs riding a 43-game regular season win streak as well as a six-game winning streak against the Lakers.

Murphy, this week’s D2Football National Defensive Player of The Week, leads the nation in sacks and tackles for loss this season from the defensive end position. He spoke with the media Wednesday about Saturday’s highly anticipated game.

WATCH: FSU defensive end Caleb Murphy speaks to the media following today’s practice as the Bulldogs gear up for the Anchor-Bone Classic! pic.twitter.com/JM3fFhC6WL

Caleb, this week is the Grand Valley game. What are you most looking forward to going into this week?

You probably understand the rivalry in a different way than most of your teammates do.

I know how those guys feel about the rivalry and I also know how the guys here feel about it. Knowing both ends is probably pretty cool but other than that, it’s just a football game. That’s all I’m worried about.

How do both sides feel about the rivalry?
I would say there’s a chip on their shoulder either way. We’re No. 1 and No. 2 in the nation and typically are the best teams in the GLIAC each year. There’s a chip on both sides to prove who’s the best.

What does it feel like to be able to play in a game where it’s one versus two?

It’s just another game. Guys are gonna ball either way so it doesn’t matter who we face. We’re just gonna go out and play Ferris State football.

Talk about Grand Valley’s offense. What do you guys think about them and what are you expecting to face?

They like to run the ball. They’re a run-heavy team, so obviously defensively we need to stop the run. Once we do that, get the quarterback under duress and go from there.
What’s the excitement level going into this game? There’s going to be crowds and fans from both schools.

It should be like any other game. If any of the guys are taking it any other way, they are wrong. We should come out here every Saturday working hard the same way we do any other day.

You lead the nation in sacks. It’s not like you came out of nowhere. I’m sure you’re getting plenty of attention. How are you getting it done and how are you adjusting to what other are teams trying to do to block you?

I give a lot of credit to my d-line. As long as they’re doing their job and we’re all doing there job, I get there. The team depends on me to get home and I’m gonna do what the team asks me to do. If we all do our job, things open up?

How much weight do you carry as a defensive unit in this game against Grand Valley? They’re obviously a solid offense.

We take pride going up against any team we play. We got scored on a few times last week and we did not like it. We’re trying to come back from that and be perfect. Obviously, there’s going to be mistakes but just coming back every play and doing the right things.

What does this rivalry mean for the schools and communities and how much do you enjoy being a part of that?

I know the community is big on it. I have friends up here and friends down there and they’re all rooting for their teams. Just coming out and putting on a show for them would be pretty cool.