Roundup: Eddies, Rangers pick up wins in final tune up 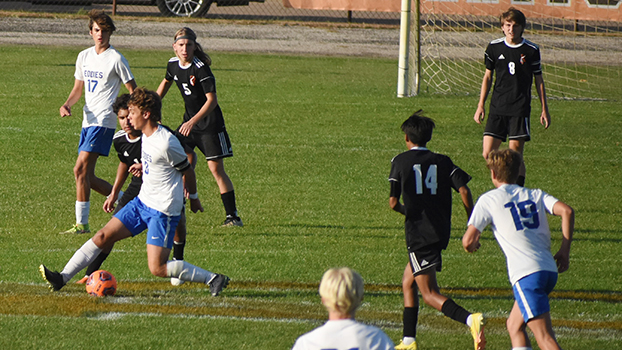 Edwardsburg defeated Dowagiac 7-2 in the final tune-up for both teams before the state tournament begins today. (Leader photo/SCOTT NOVAK)

In Cassopolis, the Rangers honored their seniors before defeating Berrien Springs 6-1 in a non-league match.

Lakeshore defeated Niles 9-1 in a battle of former SMAC foes.

Kya Bryant, Dion Sokhadze, Kaleb Brown, Grayson Herbert and Alex Carfi had the goals for Edwardsburg in the opening 40 minutes of play.

Sokhadze scored both goals in the second-half for the Eddies, who improved to 14-3-0 on the season.

Edwardsburg hosts Lakeshore in the opening round of the Division 2 District Tournament. The Lancers defeated Niles 9-1 in its final tune up Monday night. Play is scheduled to begin at 4:30 p.m.

Andres Hernandez had both goals for the Chieftains, who are the inaugural Lakeland Conference champions.

Dowagiac heads to Buchanan to face the Bucks in the opening match of the Division 3 District Tournament, The Chieftains blanked the Bucks 5-0 in their Lakeland Conference match 10 days ago. The match is scheduled to start at 5 p.m.

“Today was a tough game,” said Dowagiac coach Joey Pasternak. A lot of credit to Edwardsburg they are a good team. When you play a team like that you have to play a near perfect game and we just couldn’t do the things we needed to do today. It was a good test right before district to see the level we will have to play at If we want to keep moving forward in district and beyond. We have a really good team just need to find the consistency to get to the next level.”

The Rangers led 2-1 at halftime on goals by Logan Pflug and Kenny May.

In the second half, Gavin Anderson had a pair of goals, while Pflug picked up his second score of the match.

The Rangers’ sixth goal was a Berrien Springs own-goal off a corner kick.

Cassopolis heads to New Buffalo tonight for its Division 4 District opener against the Bison. The match is scheduled to begin at 6 p.m.

“We have had a bit of an up and down season and have lost some games that I really thought we were capable of winning and some,” said Cassopolis Coach Austin Francis. “With it being senior night, it was good to see our guys play with some intensity again. We are really looking forward to district play later this week.”

The visiting Lancers led 2-1 at halftime.

Lakeshore scored seven goals in the second half to turn the match into a rout.

Andrew Ntsiful has the lone goal for the Vikings.

Isaac Emerson had three goals and Aidan Baker two goals for the Lancers.

Niles will host Wolverine Conference foe Sturgis at 5 p.m. today in the opening round of the Division 2 District Tournament.