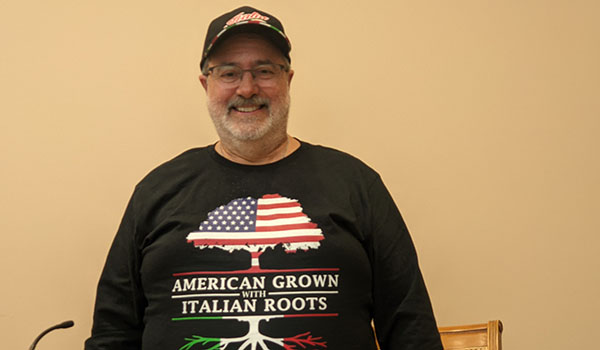 NILES — October is Italian-American Heritage and Culture Month and one local politician is celebrating his roots.

City of Niles 4th Ward Councilmember John DiCostanzo spoke about his upbringing as a first-generation Italian-American near the end of Monday’s city council meeting while sporting an “American grown with Italian roots” shirt.

“Being raised by an immigrant, somebody who chose America as his country, was kind of interesting,” he said. “He was born in Italy. When everybody there was poor people really fled Italy for all over, including his family. He had many brothers and sisters; one of his brothers emigrated to France, one to Australia and he migrated to the United States.”

A native of Long Island, New York, DiCostanzo and his wife and children moved to Niles in 1988, attracted by the cost of living. In 2012, DiCostanzo joined the city planning commission and in 2016 became a member of city council.

DiCostanzo said he is “very grateful” to his father for the sacrifices he made to give his family a better life.

“My family has been blessed to be Americans and I can tell you, the one thing he always impressed on myself and my siblings was that the one the best aspects of American life was the opportunity to do the best that you can do where that’s not possible in most places,” he said. “His proudest accomplishment in his life, other than his children, was becoming an American citizen.”

Growing up in the New York metropolitan area, DiContanzo saw people of different cultures and backgrounds taking pride in their differences.

“Everybody celebrated their ethnicity and were very proud of it,” he said. “There were rivalries, but it was all in fun.”

DiCostanzo encouraged everyone in attendance to celebrate their unique backgrounds.

“I think everyone should learn some history of their heritage and appreciate it as we try to pass that on down to our children and grandchildren.”