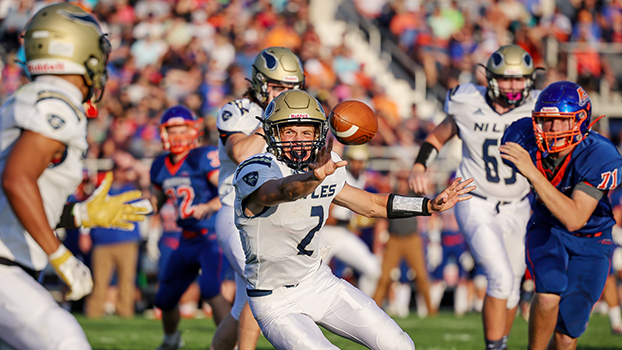 PAW PAW — Despite the shuffling of the game site last Friday, the Niles football team remained focused and picked up its third win of the season as it routed host Paw Paw 49-8 in a Wolverine Conference contest.

The game was originally scheduled to be played as Dowagiac’s Chris Taylor-Alumni Field, the contest was moved to Paw Paw after Niles alerted Dowagiac to threats that were made earlier in the week about potential violence at the game.

Dowagiac Superintendent Jonathan Whan asked Niles to find a different site for the game, which was switched Friday afternoon to Paw Paw.

The Vikings used a 22-point second quarter to break open the close contest and went on to score its biggest win of the season. Niles is now 3-4 overall and 2-2 in Wolverine Conference games.

After Paul Hess staked the Vikings to a 6-0 first-quarter lead with a 4-yard touchdown run, Niles exploded for 22 points and 49 unanswered by added a pair of touchdowns in the third quarter and one final score in the fourth before the Red Wolves averted the shutout with 10 second remaining in the contest.

Sam Rucker extended Niles’ lead to 35-0 with a 60-yard touchdown run 15 seconds into the second half. Talon Brawley scored back-to-back touchdowns in the third and fourth quarter on runs of 13- and 9-yards.

Logan Leonard found the end zone from 3-yards out with 10 seconds remaining for Paw Paw’s only touchdown.

Rucker led the Viking with 123 yards on four carries, while Hess added 97 yards on 12 carries and Brawley 69 yards on six totes.

Niles heads to Otsego Friday night for its final Wolverine Conference contest. The Vikings will wrap up the regular season with its annual rivalry game against Dowagiac. The game has been moved from Dowagiac to St. Joseph.