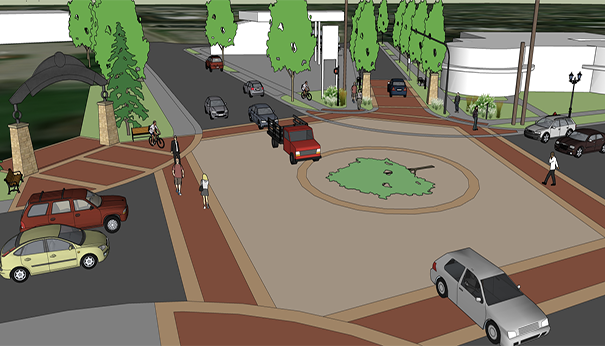 BUCHANAN — The City of Buchanan’s anticipated downtown infrastructure and streetscape project is beginning to take shape.

The Buchanan City Commission unanimously approved a design update to the downtown streetscape project which allows Rynearson Street to remain open at the intersection of Rynearson and East Front Street.

The city hosted a downtown streetscape concept update Monday at City Hall, 302 Red Bud Trail. There, community members listened to a presentation from the City of Buchanan and Mike Schwartz of engineering consultant firm Prein & Newhof, who presented those in attendance with updated mock-up sketches and designs of streetscape layout options for the downtown intersection of East Front Street and Redbud Trail.

The Board of Commissioners was presented with two concepts to consider – a concept which closed Rynearson and created a plaza space and a second concept leaving Rynearson open with the road becoming “plaza-like” with decorative paving.

After receiving feedback from the community in the form of public hearings and open houses, the majority of which was against the closing of Rynearson, the board decided after listening to Schwartz’s presentation to leave Rynearson Street open, as the concept achieves the goal of “stretching downtown” and creating a more dynamic, safer, and more beautiful “Main-on-Main intersection” without closing Rynearson at this time.

“When we use the term ‘stretching’, what we’re stretching is the streetscape design elements themselves,” said Buchanan City Manager Heather Grace. “We’re trying to have the look and feel of a vibrant downtown expanded into more than just a two-block area. We want to identify commercial corridors and areas that we think makes sense to include that downtown aesthetic look and feel so that it’s all interconnected and that visualization makes you feel like if you’re in this section, you’re in downtown, but if you’re over here, you’re still in downtown.”

The commission believed that leaving Rynearson open for the time being was the best decision and allowed for businesses like the Citgo gas station and the Buchanan Moose lodge to continue using Rynearson to transport goods to and from their businesses.

“I like the idea of (leaving Rynearson open),” said Mayor Sean Denison. “I really think at this time, there’s enough other work to worry about.”

With assistance from the city, Prein & Newhof conducted a three-year infrastructure assessment from 2016 to 2018 that identified a critical need to update old water mains, storm sewers, and sanitary sewer infrastructure that runs under downtown and neighborhood streets.

The city has secured significant funding – approximately $14 million – through the U.S. Department of Agriculture for the project, which will begin a phasing of the replacement of city sewer and water lines, as well as a new downtown streetscape. The project – which will feature the reconstruction of portions of Front Street, Dewey Street, Main Street Oak Street and Red Bud Trail – will require large portions of downtown to be closed to vehicular traffic for extended periods of time.

“That’s been really the whole key of this whole downtown redesign is to basically try to make the trucks feel like they don’t belong here and should be going a different route,” Schwartz said. “That’s part of the reason we’re narrowing the roads down to 11 feet, making these turnouts in there, raising the road up, just a whole bunch of different other traffic calming devices that really kind of make the trucks not want to be there yet it still makes it safe for pedestrians.”

Schwartz hopes to present the commission with a two-year targeted project plan by Thanksgiving and ​​said his team is hoping to begin construction in 2023 and complete the project in 2025.