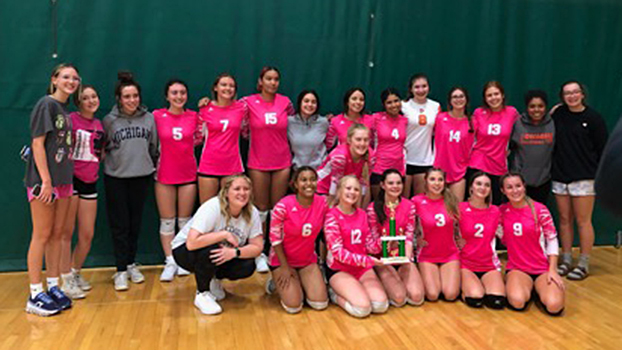 “Today was a great day to play volleyball,” said Dowagiac Coach Amber Todd. “Caleigh Wimberley led the team today with fantastic serving and putting the ball away at crucial times. Brooklyn Smith did a great job running our offense throughout the tournament. Maggie Weller and Alanah Smith were dominant in the middle. Abbey Dobberstein did a fantastic job in serve receive and on defense as well, she is taking charge in the back row and dominating in the libero position. I am extremely proud of how hard these girls played today and how they never gave up in the championship game.”

In the title match, Wimberley had nine kills, an ace and four digs, while Weller Alanah Smith had eight kills and three blocks. Weller had six kills, an ace, an assist, a block and two digs. Do

Dobberstein finished with an ace and 12 digs.

On the day, Wimberley finished with 43 kills, Weller 42 kills and Alanah Smith 25 kills. Wimberley also led the team in aces with 22. Brooklyn Smith had a team-high 118 assists, while Dobberstein led the team in digs with 78.

Dowagiac returns to the court Thursday when it hosts Buchanan for its Dig Pink match, as well as a battle for first-place in the Lakeland Conference.

The Bobcats continued their roll with a runner-up finish at the Shamrock Invitational in Berrien Springs Saturday.

Kadence Brumitt had 54 kills to lead the Bobcats, while Kallie Solloway had 26. Hope Tyler led the team in digs with 50, while Brumitt finished with 33. Addy Drotoz and Clara DePeriest both had 28 digs.

Brumitt led in blocks with nine. Tessa Hullinger finished with eight. DePriest had 97 assists and Drotoz had 11 aces.

Brandywine is back in action Saturday as it competes in the St. Joseph Invitational.