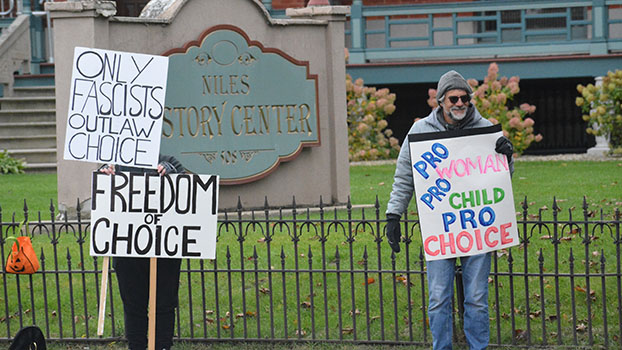 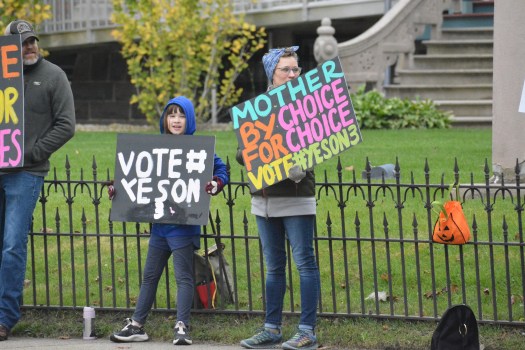 NILES — A group of community members gathered in front of the Chapin Mansion Saturday afternoon for a rally supporting women’s reproductive rights.

More than a dozen people gathered at the intersection of Fifth and Main Street in downtown Niles to inform voters about Proposal 3. The event was one of dozens of marches and demonstrations held in conjunction with Red Wine and Blue and the national Women’s March in Washington, D.C.
Demonstrators cheered as drivers passing by honked their horns in solidarity. Rally organizer Jodi VandenHeede was pleased by the response from both demonstrators and passersby.

“The idea really is to let people know what Proposal 3 is and make sure that they understand that they’ve got to be registered and to get out and vote on Nov. 8,” she said.

Proposal 3, if passed, would provide a state constitutional right to reproductive freedom, which is defined as “the right to make and effectuate decisions about all matters relating to pregnancy, including but not limited to prenatal care, childbirth, postpartum care, contraception, sterilization, abortion care, miscarriage management, and infertility care.”

A “no” vote would oppose providing a state constitutional right to reproductive freedom. VandenHeede said the support she has both seen and received ahead of the election has been “enormous”.

“I think the idea that most people have is even if they would not make a particular choice, that it is up to an individual to be able to,” she said.”It’s between the individual and their doctor.”