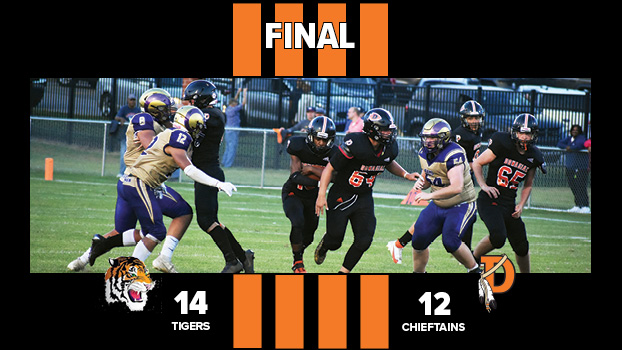 After a potential threat of violence, the game was originally called off. But school officials decided that the game would be played at Filstrip Field as scheduled, although kickoff was delayed slightly due because of the late decision to continue, but with limited crowd.

The host Tigers had to stop a late 2-point conversion by the Chieftains to pull out a 14-12 win over the Chieftains in the Lakeland Conference contest. It was the second time in two weeks that Dowagiac has lost 14-12. In between, the Chieftains snapped a 15-game losing streak.

Avontae Tasker got Benton Harbor (4-3, 2-1 Lakeland) on the board first with a 39-yard touchdown reception from Davionte Tasker, Julius Watkins added the 2-point conversion run to give the Tigers an 8-0 lead.

Dowagiac (1-5, 0-4 Lakeland) got on the scoreboard with 1:41 remaining in the second quarter when Avery Amundsen scored on a 3-yard run. The score came after the Chieftains recovered one of three first-half Benton Harbor turnovers.

Dowagiac failed to convert on the extra point, which was blocked by the Tigers.

Davionte Tasker scored what turned out to be the winning touchdown in the third quarter on a 10-yard touchdown pass from Avontae Tasker. Benton Harbor failed on the 2-point conversion, but took a 14-6 lead into the final quarter.

The Chieftains closed to within 14-12 with 1:41 remaining on an 8-yard Isiah Hill run. Benton Harbor stopped the 2-point conversion and then recovered the on-side kick to seal the victory.