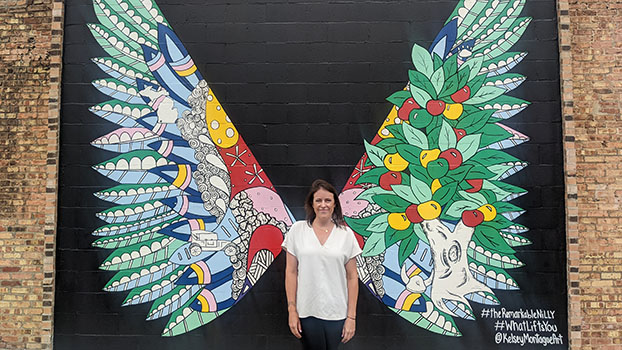 NILES – A new mural will soon change the scenery of the parking lot at the corner of Front and Main streets in downtown Niles.

World-renowned artist Kelsey Montague finished work on her latest “What Lifts You” mural on the Main Street-facing side of 218 Front St., Niles, a building owned by Melanie Kennedy of The Grand LV and Remarkable INC.

“I was super excited to work with Remarkable Inc. to come here to Niles and do a pretty cool piece that I’m hoping the community will like and will want to interact with and become part of art,” Montague said.

Montague began working on the project Wednesday afternoon and completed it Thursday morning. The mural features a pair of painted angel wings that feature five images hidden inside the wings highlight characteristics of the community, including an apple tree for the Four Flags Apple Festival, a Viking helmet for Niles High School mascot, a bobcat paw-print for Brandywine High School, a map of Michigan with a star highlighting Niles and a Dodge car for the Dodge Brothers, John and Horace, who were born in Niles and went on to found the Dodge Motor Car Company. According to Kennedy, the building the mural rests on was originally a Dodge showroom.

“It’s just something I hope people, especially in the community, will really love and represent,” Montague said.

The art piece is the latest in Montague’s “What Lifts You” (#whatliftsyou) series of pieces that often feature a pair of wings or a swing that people can stand in front of and have their pictures taken.

“It’s about inspiring people to share something positive in their life and spread a positive message,” Montague said. “A lot of my work, whether it’s wings or a swing that you can be sitting on or a flamingo that looks like it’s kissing you on the head, hopefully it’s just inspiring and positive.”

The mural served as the first project for Remarkable INC., a non-profit organization dedicated to project-based philanthropic improvements in Niles. After discovering Montague’s work while on a trip, Kennedy spent the summer raising money to have Montague create a mural by selling tickets for a Remarkable Inc. fundraiser last month. More than 20 local businesses sponsored the project.

“I’m actually kind of emotional,” she said. “Niles is a great little small town but there’s lots of those in southwest Michigan, so what can set us apart from the rest? I think this is a pretty good starting point.”

A native of Denver, Colorado, Montague has created art pieces in countries around the world such as Switzerland, Australia, South Africa, Poland and more and has more than 150,000 followers on Instagram. She has also created murals in Michigan, including a “What Lifts You” mural in Muskegon, Michigan.

Montague hopes the mural will serve as a destination piece drawing people into downtown Niles to interact with the piece.

“That’s what it’s all about,” she said. “Especially just even watching other people that are happy and like laughing or interacting with it. I just hope that it just brings a smile to everyone’s face. I’m super excited to be back (in Michigan). Every time I get to come up here, it’s fun.”