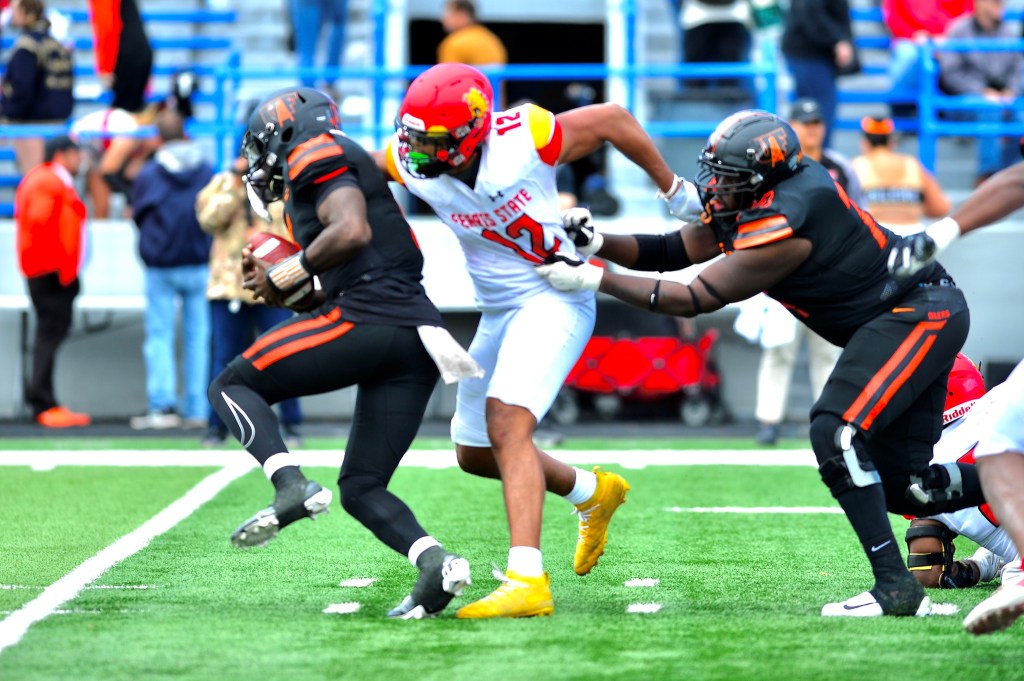 The Bulldogs bolted out to a 31-0 halftime lead and cruised to their 42nd consecutive regular-season triumph, matching the historic 1992-96 era that went 40-0-2 overall for the longest unbeaten stretch in school history.

Redshirt freshman quarterback Carson Gulker ran for a team-high 122 yards and two scores as the Bulldogs generated 460 yards of total offense, including 306 rushing yards on 50 attempts. Senior Evan Cummins ran for 48 yards on eight attempts and completed six-of-10 passes for 73 yards and a score.

Ferris State scored the opening points on freshman Eddie Jewett’s 36-yard field goal with 11:23 remaining in the first period. The lead grew to 10-0 after one period as FSU used the short field to find pay dirt on Gulker’s 3-yard scamper.

Ferris State exploded for the second consecutive week in the second period as FSU rolled up 21 points in the frame to make it 31-0 at the break. Sophomore Tyrese Hunt-Thompson ran for an eight-yard score to finish an 11-play, 65-yard drive, making it 17-0. Then, Gulker reached the end zone on a 54-yard touchdown carry with 3:11 left in the period. FSU tacked on a final first-half score as the Bulldogs drove 93 yards in nine plays, with Cummins hooking up with Hunt-Thompson on a nine-yard scoring throw only 14 seconds before intermission.

In the third quarter, the Bulldogs extended the lead to 38-0 when slot receiver CJ Jefferson capped off a nine-play, 72-yard jaunt with a six-yard TD carry midway thru the frame.

The Oilers found the end zone for the only time when Jeremy Hunt tossed a six-yard scoring throw to Bryan Hunt with 14:56 left in the game, finishing a 99-yard drive.

FSU was led defensively by end Caleb Murphy with seven tackles, including a pair of sacks and two tackles for loss.