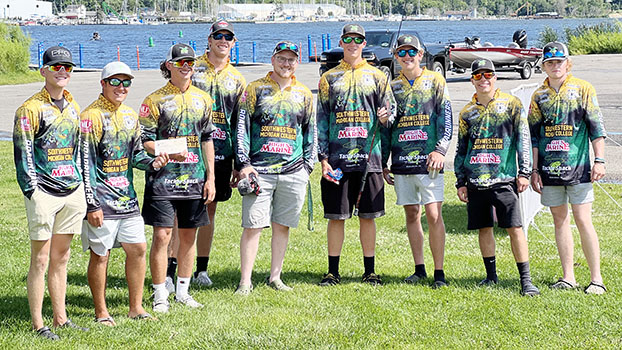 While an SMC student in 2016-17, Mathews, 26, tutored in the Carole A. Tate Teaching and Learning Center in Fred L. Mathews Library, where he found himself Sept. 21 sharing his origin story for a “Lightning Talk.” His wife, the former Courtney Hartline, also worked in the library.

The New Lenox, Ill., native lived at Sister Lakes while attending SMC and worked as a professional tutor for accounting and statistics.

Fishing’s appeal for Mathews is “it’s like an interactive puzzle.” Factoring lures, conditions and time of year in an eight-hour tournament produces “an adrenaline rush.”

Mathews, who joined the SMC staff in April 2021, grew up on the water at his family’s Cable Lake cottage. While his family hit the beach or ventured into town, “I fished from sunup to sundown, coming in only for lunch. I used to play video games. I don’t anymore. I dropped everything but fishing. YouTube was an outlet for me when I was learning to fish,” just as he relied on the Google-owned video sharing and social media platform established in 2005 to teach himself to create and edit content.

“My first tournament I didn’t catch a single bass,” said Mathews, a state champion at 14. “That drove me harder. I pored over YouTube videos for hours before the next tournament, learned more stuff and got second place. Not catching anything was maybe one of the best things that ever happened to me. You can never know enough about fishing, but I had learned the main techniques. People were starting to come to me for information — even my dad, who’s been fishing for 50 years.”

“It dawned on me that I should record my fishing knowledge and put it on YouTube, since I learned from others,” Mathews said. “It was a two-pronged approach. One, to teach others. Two, and the reason I still do YouTube, is preserving memories, like my college videos” at Grand Valley State University, where he earned a bachelor’s degree in marketing. He fished tournaments in Texas, Florida, Arkansas, New York, Tennessee and Kentucky for GVSU.

Some early exploits, Mathews might be tempted to forget. He launched his channel in January 2013 and posted his first video in February, so it’s coming up on the 10th anniversary.

“I had no equipment and didn’t know how to do anything when it comes to making YouTube videos,” Mathews said. “No camera, no laptop, didn’t know how to use editing software, audio or framing shots. I had my iPhone 4. I downloaded a $5 app and edited on the phone, which was terrible. There are no action shots because you can’t strap an iPhone to your chest. I’d catch a fish, turn the phone on and talk about it. At that time, there weren’t a lot of YouTubers making fishing content. I was lucky to get 100 views.”

He splurged on a GoPro Hero 3 and a laptop for editing. “That was the game-changer because my content got so much better,” he said.

His breakthrough came at Paw Paw Lake at his expense when he landed what proved to be a “massive carp” instead of a big bass. But overnight, the short clip amassed 10,000 views, thanks to a share by Field and Stream.

Contrary to control content creators can exert in a studio, fishing videos “are at the mercy of an animal that lives in the water that has a brain the size of a peanut,” Mathews said. “Consistency was key. If a video explodes and you don’t post another for two months, you’ll be banished to the shadow realms. It’s important to keep that snowball rolling doing YouTube.”

Mathews makes money at his side hustle, “but I never pursued companies. You want to align yourself with the same niche, so let brands come to you. I started by plugging products with a few companies for free gear, but from the beginning I only worked deals with brands I believe in or use their products. Chewing tobacco companies reached out, but I don’t think that has anything to do with my channel. The key with influencer marketing is your audience trusting you as an expert in your field. If I plug random things, I’m going to lose viewership and credibility.”