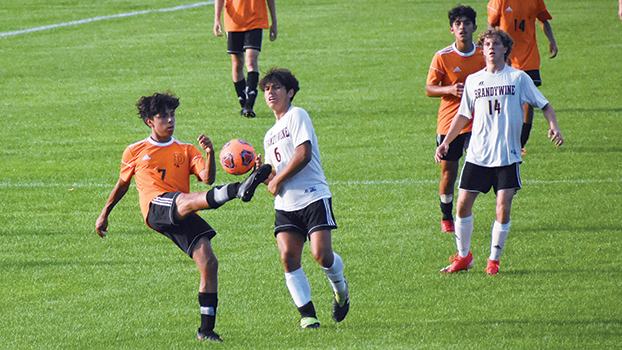 DOWAGIAC — The Dowagiac soccer team picked up a pair of wins — one in the Lakeland Conference and the other non-conference — as it continues to show improvement.

Dowagiac led 1-0 at halftime, and then scored three second-half goals to pick up the victory. Andres Hernandez had a pair of goals for the Chieftains, who also got goals from Mason Phillips and Chase Morse.

Brandywine averted the shutout late in the second half when Robert Hartz scored to cut the Dowagiac lead to 3-1.

“Our team played well and was competitive from start to finish,” said Brandywine Coach Caleb Adams. “Another goal by Robert Hartz off of a quick restart from Jacob Sherrick gave us life in the second half. We had other chances that we failed to capitalize on including a missed PK and a one on one with the keeper that didn’t go our way. We were overall pleased with the competitive play of both teams tonight.”

Dowagiac led 1-0 at halftime on the first of two goals by Chase Morse. Morse added a goal in the second half, while Allex Hernandez and Jordan Townsend also scored.

“Today we showed our inexperience a little bit and fell into playing kick ball and playing at their pace in the first half,” said Dowagiac Coach Joey Pasternak. “They came out fast and aggressive and took us by surprise and we didn’t play our game. In the second half, we settled down and started playing Dowagiac soccer moving the ball and put a few in the back of the net. I like how the boys responded and settled down and got back to our ways.”

The Chieftains head back to the pitch Tuesday when they travel to Berrien Springs for another Lakeland Conference match.

Brandywine played host to Cassopolis in a non-conference match today.

Kya Bryant had a pair of goals, while Grayson Herbert had a goal and an assist as the Eddies improved to 10-2 overall.

The visiting Bucks were blanked by the Wildcats 2-0.

Scoring goals for Three Rivers were Ryan Lubienicki and Zone Major. Lubienicki also had an assist.

The visiting Vikings dropped to 7-5 on the season and 2-1 in the Wolverine Conference with their 7-2 loss to Sturgis Wednesday night.

Casey Marlin had both goals for Niles. Kaleb Thornton assisted on the second goal.