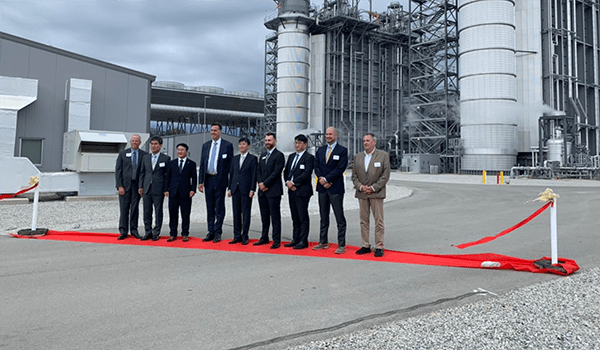 NILES — An event years in the making took place Tuesday in the Niles Industrial Park.

The Indeck Niles Energy Center is a state-of-the-art energy center fueled by natural gas. The facility will use combined-cycle technology to generate electricity. In a combined-cycle process, energy is produced through a gas turbine and the excess heat is recovered and converted to steam to produce additional electricity. Combined-cycle plants are described as highly efficient and emit significantly fewer emissions than coal-fired power plants.

The project broke ground in September 2019. An average of 700,000 buildings are projected to be powered by the Indeck’s plant, which will operate 24 hours per day, seven days per week.

“What began with the multi-million dollar clean-up of a contaminated, City-owned piece of land, has now become an investment that has not only saved the property Indeck was built on, but will now generate nearly $1 million in Brownfield Redevelopment funding for future economic growth in Niles,” said Niles Mayor Nick Shelton in a Facebook statement.

More than $1 billion was invested in the project which, which both city and Indeck officials believe represents a significant investment in the City of Niles and the local area. The Indeck Niles Energy Center will:

According to Shelton, the Indeck project will allow the Niles community school bond to be paid off nearly eight years ahead of schedule, lowering the burden for community members in the school district. Indeck will also help to generate additional revenue for Southwestern Michigan College, the Niles District Library and Niles Dial-a-Ride Transportation. In addition, the Indeck Energy Center will generate millions of dollars in tax revenue that will directly impact city and county governments.

“In short, the Indeck Niles Energy Center will improve the quality of life for all Niles citizens for years to come,” Shelton said. “On behalf of the City of Niles, we congratulate you, Indeck, and look forward to your long and successful tenure in the City of Niles.”